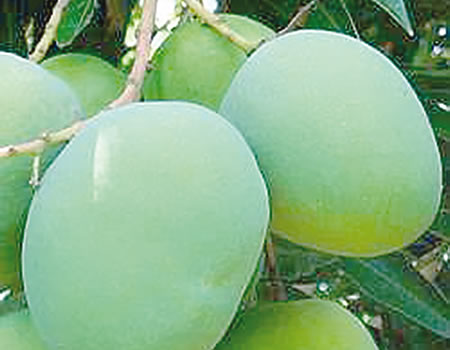 YOU may have thought that consuming unripe mangoes could be harmful, but research has shown that eating the fruit in that state is most suitable for an improved well-being.

Experts have revealed that unripe mangoes add immense value to one’s health, but for most people, the ripe ones are mostly sought after. This could be as a result of its sweetness and juicy taste.

However, recent studies have proven unripe mangoes to be high in vitamin C and other medicinal properties.  The mango, botanically called Mangiferaindica, is the most popular fruit of the tropics called ‘The king of Asiatic fruits.’ It is fleshy drupe, varying in size. Mango grows on a large, erect, branched, evergreen tree. The leaves when fully grown are stiff, pointed and deep glossy green. These are used in ceremonial decorations.

Unlike the ripe mangoes, which are wholesome and nourishing, green or unripe mangoes are sour in taste because of the presence of oxalic, citric, malic and succinic acids.

According to a food scientist, H.K. Bakhru in his book entitled Foods that Heal first published in 1990, unripe mangoes are valuable sources of vitamin C; they contain more than half-ripe or fully ripe mangoes. They are also a good source of vitamin B1 and B2, with sufficient quantity of niacin.

Another expert in medicinal plants, India, J.F Dartur, identified the unripe fruit (mango) as acidic astringent and antiscorbutic. Speaking on the medicinal benefits of unripe mangoes, these experts disclosed that a drink prepared from the unripe mango, by cooking it in hot ashes and mixing the pith with sugar and water, is an effective remedy for heat exhaustion and heat stroke. Drinking unripe mango juice prevents the excessive loss of sodium and iron due to excessive sweating.

He also revealed that unripe green mangoes are beneficial in the treatment of gastro-intestinal disorders. “Eating one or two small tender mangoes in which the seed is not fully formed with salt and honey is found to be a very effective medicine for summer diarrhoea, dysentery, pile, morning sickness, chronic dyspepsia, indigestion and constipation,” he said.

Dr Bakhru revealed that green mango is effective in blood disorders because of its high vitamin C content. He said it increases the elasticity of the blood vessels and helps the formation of new blood cells.

Alexis Mucumbitsi, an expert in nutrition at the Ministry of Health, Rwanda, explains that mangoes are important in the prevention of diseases because they are rich in various vitamins.

He noted that the fruit is rich in vitamin A and C, calcium, iron and 82 per cent of magnesium which is vital for the extraction of wastes in the body.

“Raw mangoes contain an acid which helps ease digestion and control constipation. They also help the skin soften and breathe, making it healthy. Mangoes also help in the fight against diabetes by reducing sugar levels in the body,” Mucumbitsi said.

The fact that unripe mangoes have more antioxidants and vitamin C than ripe mangoes, make them effective in the protection of the body against cancer and cardiovascular diseases.

Some studies also reveal that unripe mangoes is an effective treatment for scurvy, which is often characterised by bleeding gums, rashes, bruising, weakness and fatigue. This is because raw mango is extremely rich in vitamin C, the deficiency of which causes scurvy. The same vitamin also promotes elasticity in blood vessels and promotes formation of red blood cells.

What does good mental health mean?