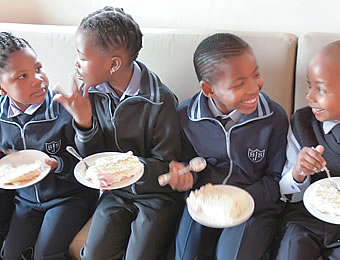 Does your child skip meals? Certainly, many children do it from time to time. Whenever they are served a big treat at a birthday party, just too tired to eat yet another meal or meals get ready very later than bedtime, they skip the meal.

Eating three square meals a day is the oldest nutrition advice in the book and some of the most important for staying healthy. Unlike children that regularly eat three square meals daily, children and adolescents that skip meals experience more health complaints.

In a new study, researchers said that irregular breakfast, lunch and dinner eating is associated with a myriad of psychological (feeling low, irritability, feeling nervous, difficulty in getting to sleep) and somatic symptoms (headache, stomach ache, backache, feeling dizzy).

Studies have shown that consuming three meals a day plays a significant role in providing a daily nutrient recommendation for macronutrients and micronutrients and skipping meals can deprive our body of the main source of nutrients and subsequently leads to experiencing adverse health outcomes.

Dinner skipping was related to 39, 59 and 52 per cent increase in odds of headache, feeling low and difficulty in getting to sleep, respectively, it was associated with decreased odds of a stomachache.

But, “children should not skip their meals at all, they should eat their three square meals and they should still have allowances for some in-between snacks because first, their metabolic rate is very high, they burn down everything they eat so fast,” said Dr Kemi Tongo, a consultant pediatrician, University College Hospital (UCH), Ibadan.

Dr Tongo declared that no matter how small the amount of food, children should eat and not skip any of their meals because their stomach empties itself rapidly and they need a lot more energy per kilogramme body weight than the adults require.

According to her: “If a child does not take breakfast, concentration in school will be a  problem. The child will be feeling sleepy, and when the blood sugar level is low, the child will have a headache. The same thing goes for their lunch. If they don’t have it, they may have headaches and the hunger pang may make them  to be having abdominal pains.

“Functional abdominal pain is a fairly common problem in children of school age 7 and up to 10 years old. Such pains will even be aggravated further when they don’t eat regularly.

Moreover, Dr Funmi Salami, a paediatrician and special advisor to Governor Seyi Makinde on health, said most parents will not knowingly want to have their children skip their meals, except in case of neglect.

Dr Salami, however, said adequate feeding is important for brain growth in children even as she stressed that parents also need to know the basic foods that they should feed to their children,

She added: “It is important they can try their best so that the children are getting nutritious meals regularly rather than put everything in one meal and say at least you can skip saying lunch or dinner. They can actually spread their meals and make sure that their meals are nutritious. A nutritious meal does not have to mean it must be out of reach, it only needs to be balanced based on common foods items in their environment.”

The study had involved 14,400 students aged seven to 18 years who were selected from 30 provinces of Iran.  The data were collected as a part of the fifth survey of Childhood and Adolescence Surveillance and Prevention of Adult Noncommunicable disease (CASPIAN)-V study. It was in the journal, Eating and Weight Disorders.

Eligible students, who had Iranian nationality, did not have any chronic conditions and did not use any medication, were identified and interviewed. The provided information was about their lifestyle, health status, health-related behaviours and health complaints.

In the study, breakfast skipping was more prevalent in those aged 13 to 18. While, lunch and dinner skipping were 5.9 and 6.6 per cent in seven to 12 years old, respectively.

However, the researchers’ finding indicated that although skipping meals was related to backache and stomachache, skipping dinner was a protective factor for stomachache. Irregular meal timing is correlated with increased acidity, gastric reflux, and eventually stomachache.

They declared: “Regarding the protective effects of dinner on stomachache, it is possible that children consume a heavy meal at dinner or there might be short dinner-to-bed time which is associated with gastro-oesophagal reflux and other related symptoms.”