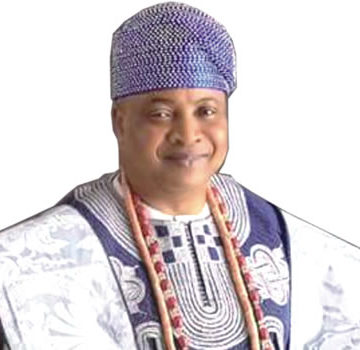 THE Akarigbo and Paramount Ruler of Remoland, Oba Babatunde Ajayi, on Tuesday, assured sons and daughters of Remoland about the overwhelming development that will begin to manifest across the land soonest.

He gave this assurance in an interview with newsmen shortly after his thank-you-visit to the Olu and Paramount Ruler of Yewaland, Oba Kehinde Olugbenle, at his palace in Ilaro.

Oba Ajayi had on Monday paid a similar visit to Oba of Lagos, Oba Rilwan Akiolu and the Alake and Paramount Ruler of Egbaland on Tuesday.

The monarch noted that a blueprint for the development of Remoland would be formally handed over to him on Friday.

Oba Ajayi said quite a lot had been achieved during his one year reign due to peaceful coexistence among the people of Remoland, highlighting the establishment of the Nigerian Immigration Service /Passport Office and the creation of a platform “The Remo Growth Foundation” as some of the few achievements recorded.

“We have done a lot. There are absolute peace and tranquillity across Remoland. By and large, it is more of unity among our people, the sense of hope that we have given them. Our people are hopeful as we have really done a lot in the area of investment. People have been coming to make enquiries about the acquisition of lands, about the investment they want to put in Remo. We have actually set the pace.”

On the visit, Akarigbo said it became imperative considering the show of love and support he received from his colleagues since he assumed the throne of his forebears about a year ago.

Oba Ajayi stressed the need for Yoruba Obas to rally round one another in the spirit of good brotherliness to bring about development to the land.

He maintained that Yoruba traditional rulers must speak with one voice and shun any form of ego or superiority issue and sued for cooperation.

“It is imperative for Yoruba Obas to come together. I think part of the problem that we have in Yorubaland is ego. The show of who is superior and at the end of the day, superiority will not bring about development; ego will not bring development to your people and if we don’t speak with one voice they will relegate us to where we ought not to be.

“We are not as divided as people have made it be, but we do need some cooperation. We need to intensify our effort to integrate and look after each other and this is the only way the Yorubas can take its rightful position in the country.

Oba Akiolu equally corroborated Akarigbo on the need for unity among Yoruba Obas. He submitted that hatred and bickering do not bring about anything good.

“We need to come together as one for the development of our region. Hatred and bickering will do us no good. We should not be selfish. Anyone placed in a position of authority must be good to others, ” the monarch added.

The Akarigbo also seized the opportunity to admonish politicians on the need to reflect that ” only God giveth power” and that everything in life is temporary.

“The electorate should ‘shine’ their eyes. Our politicians should take things easy because it is God that giveth power. They should jettison the attitude of we must be there at all cost.

“They must be able to reflect and see that everything in life is temporary. We will continue to pray for them and we believe that God will give us leaders that we will all be proud of, ” he added.

FG advised to involve owners of Islamic schools in administration

Tuberculosis: Nigeria ranks 1st in Africa, 60th in the World