We’re working on getting sponsors for 3SC — Rasheed Balogun,GM

General Manager of Shooting Stars Sports Club (3SC), Rasheed Balogun, in this interview, with Niyi Alebiosu spoke extensively on issues pertaining to the Oluyole Warriors, the Nigeria National League (NNL), as well as what makes Governor Seyi Makinde different from other governors he had worked with. Here are excerpts from the interview.

InterviewSports
By Tribune Online On Jul 16, 2020 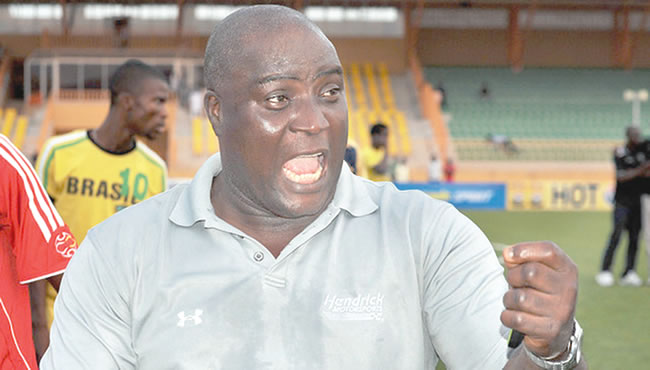 On The rumoured cancelation of the NNL

The reports about the cancelation of the 2019/20 season of the Nigeria National League, is not true. It has not been made official yet.

What actually happened was that the second vice president of the NFF, who is the chairman of the LMC or NPFL, as you will like to call it, made known his own personal opinion.

It was just his own proposal that a super six should be organized for the NPFL, while other leagues should be canceled. It was not the decision of the NFF as the football ruling body.

When I saw it, I called the first vice chairman,Mr Seyi Akinwunmi, to confirm whether that was their collective decision but he (Akinwunmi) told me that he was hearing that from me for the first time.

So, the issue of cancelation is not yet confirmed because no official letter has been sent to clubs and no official statement, has been made yet in that regard.

On the fate of Shooting Stars

For now, I want the followers of the club to est assured that we are still on it. I told some people in a meeting that if Super Six would be organized for the NPFL, then they should be able to organize Super 8 for us.

I asked then, why is is it now that the coast is becoming clearer for 3SC to gain promotion that you are now thinking of canceling and restarting, using the COVID-19 as a cover-up?

In the first place, it was not clubs that stopped the NNl, it was the organizers. I kicked against it when they said we should go on break after week five games on December 22 but some clubs, for their selfish interest, insisted on going on break and here we are with the break of no return before COVID-19, came up.

I suspect foul play, particularly when you look at the NPFL table you will observe that all the teams in the relegation zone are from the North. They are the ones coming up with the conspiracy theory of cancelation, so that they will survive the drop.

So our people should not panick, they should be rest assured that we are stIll on it

Is the Sports Minister, Sunday Dare, playing any role?

Sunday Dare is the Minister for Sports in Nigeria, not for Oyo State, and the league we are talking about is Nigeria league.

Let’s leave him out of this. As the minister, he knows what to do

I am working for the government and I must do everything  I can to get the result needed.

On getting sponsors for the club, we are working on that. I know what I went through before bringing in Nairabet then. Even the whole NFF, is having it difficult getting sponsors, not to talk of club sides.

However, I can assure you that once we get out of this NNL, companies will come after us. They will show the interest on their own, even without we calling them.

I know why I am saying this and I can say it with confidence that we already have interested sponsors. They are just waiting for us to get promoted to the topflight.

On the present state of 3sc players

I am happy to inform all our fans that all our players are doing good, I personally monitor them during this lockdown period, likewise the team manager as well as the coaches. We monitor them on a daily basis.

We at the management level are not toying with the welfare of the players, thanks to the ever supportive number one supporter of the club,, His Excellency Engineer Seyi Makinde, the Executive Govrrnor of Oyo State.

The coaches, work daily on their fitness, they know how they are doing it, even though there is difference between individual training and collective training.

It will interest you to know that this squad is like one big family, Tosin Omojola, our Media Officer can tell you more about this. If you see us, we do things together even inside the dressing room, we relate very well.

Good enough, all the players have pledged their future with the club, they said they are all staying, no matter the decision taken on the season.

And the magic wand behind keeping the players together, despite the challenges posted by the pandemic, which has affected many clubs, Balogun, is the the full backing of the state governor, Engineer Seyi Makinde.

In the  month of May, the players got paid on the 21st, we have been on break since December, yet the players get their salaries at at when due.

What makes Seyi Makinde different from other governors?

Since I started my journey in football management, I have worked with different governors along the line.

I will say governor Makinde, is a man of his words.’ “Talk am, do am”. He is upright, focused and positive-minded.

He had been a staunch supporter of the club even before he became the governor and I must tell you, he has been giving us everything we need since he assumed office.

We have been on break since December 22, yet, we are not owing the players and officials a kobo. They have been paid up to date,  because the government of  Seyi Makinde finances the club regularly.

That is why we don’t want to waste such a golden opportunity. When you have a governor who is supporting you with everything,  you must work hard to reciprocate such gesture with good results.

Let me tell you, he has done nothing yet, when you compare what he has done  to what he still has in stock for the club.

What you are seeing is just a tip of the iceberg. Governor Makinde is waiting for us to get the promotion ticket, then you will all see why he is regarded as the number one supporter of the club.

With his support, we have no other choice than to get the desired result, and that is why we are not sleeping. We must get that promotion ticket for His Excellency, the good people of Oyo State and the entire Shooting Stars supporters and fans, spread across the globe.

Views about the supporters and fans of the Oluyole Warriors.

Like I said earlier, I have worked with other clubs but to say the truth, I have been seeing club supporters and fans, what I am seeing here is different.

From the old to the young, the male and female supporters and fans of Shooting Stars, everything is peculiarly different.

3SC backers don’t want to listen to anything from you apart from issues pertaining to their club. They don’t mind going to any place, no matter how far to watch the team. They are very vociferous. They show you when they are angry with you and if it is the other way round, they won’t hide it.

Let me simply put it this way, they are exemplary different from others.

Of course, we were already working towards that, infact, we were at advance stage to get affiliated with some clubs like Valencia and Sevilla from Spain but the outbreak of the Covid-19 pandemic stalled the plans.

Affiliation is good. It will even help in exposing our players because we can be invited to come and play over there, but I am sure when we get to the elite league, like on the issue of sponsorship, where companies are waiting for us to get to the premier league before coming on board, clubs will also wish to affliliate with 3SC.