We’re back on Lagos roads to save lives, VIS tells motorists 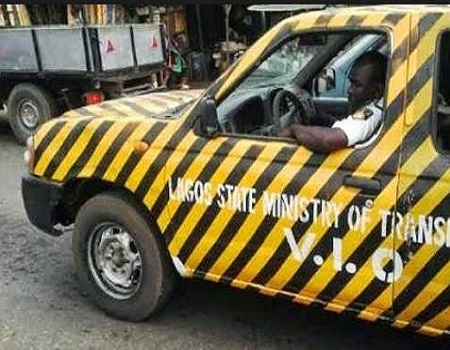 The Vehicle Inspection Service (VIS) in Lagos State says its officers are back on Lagos roads to carry out statutory life-saving mandates through enforcement of motor vehicles’ roadworthiness.

The Director of VIS, Mr Akin-George Fashola, made this known in an interview with the News Agency of Nigeria (NAN) in Lagos on Thursday.

He said that residents of the state, especially road users thought Vehicle Inspection Officers (VIOs) were off the roads.

NAN reports that the immediate past Governor of the state, Akinwunmi Ambode, banned VIOs from operating on the roads.

Fashola said: “Since the advent of this administration, citizens still believe that VIS or VIOs are still off the roads. We are not off the roads.

“As a matter of fact, we are back on the roads to do the needful.

“The presence of VIOs is required, so we are on the road. A lot of people still believe that we are still under the previous ban from the road.’’

According to him, the period of the ban, was an avenue for the vehicle inspectors to strategise and come back with fresh and new ideas and ways of performing the statutory duties the VIS is charged with.

He said that for the entire period when the VIS was off the road, most drivers and vehicle owners became careless about roadworthiness, particulars and conditions of their vehicles.

“For the period that we were not on the road, a lot of people became relaxed and do as they pleased, whereas part of the reasons for that our off-road operation was to allow citizens to do their civic responsibilities.

“Part of such responsibilities is to ensure that their vehicles are always in top shape as well as obtaining driver’s licence and renewal of vehicles’ particulars but that was not the case.

On the impact of the VIS, Fashola said that VIS was progressively moving in the right direction and improving on its services toward the citizens of the state.

According to him, going forward, the VIS will make adjustment in its daily procedures and how it interacts with the citizens of the state.

On the roadworthiness of most vehicles plying Lagos roads, the VIO boss said that only 50 per cent of the volume of traffic in the state could be said to be roadworthy.

He said: “I give the roadworthiness of vehicles on our roads 50:50 score marks.

“There are citizens who take pride in driving safe vehicles and those that do not care as long as the car is moving, nothing concerns them. These are some of the things we have to contend with and deal with.’’

Fashola called for the cooperation of motorists, urging them to obtain all necessary documents that guaranteed and qualified them to be on the road.

He said those driving without driver’s licences and other genuine particulars should desist from such habits, saying that they should either get or renew their particulars.

Fashola warned: “If you are caught driving without a licence, no plea for that failure. It is not a difficult document to get.

“It is a licence that guarantees and qualifies you to use the road. If it is expired, go and renew it.’’

He said that the minimum fine is N20,000 for not having a licence.

He said: “If you think of the money you part with, the time it will take you to go through the process and collect your vehicle, you will go and get the genuine documents,’’