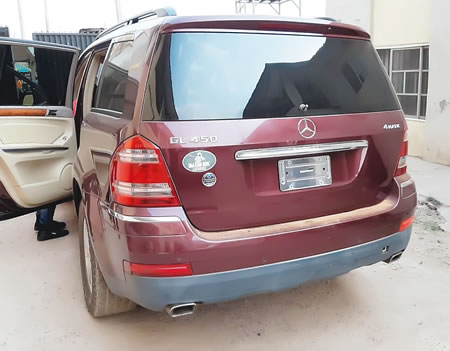 The music journey of Jasa gospel creator, Femi Solar may have gone through some twist and turns in the last few years but there seems to be something to be cheering about again.

From staging one of the most talked about music concerts in Ibadan in 2018, which dragged, CDQ, Small Doctor and others to Ibadan to dropping back to back singles that have enhanced his music career, Solar appears to be reaping the rewards of his hard work over the years.

Days back, the award-winning musician took delivery of a brand new Benz GL450 and he has since become the talk of the town with fans dropping congratulatory messages on his timeline.

Excited Solar, who shared the picture of his new ride with fans and friends on his Instagram page said he had tried to hide the news from people and move on like nothing happened, but he could not keep the good news from those who have stood by him when the going was rough.

In a statement released on his page, Solar said he posted the new SUV to inspire others, who may be going through some hard times in their lives, adding that “I am not a frivolous person and I don’t take any glory in calling unnecessary attention to myself, but this is to encourage people that God can turn things around for them if they believe, pray and work hard.”

With his duet with Gongo Aso crooner, 9ice about to be released, Solar maintained that he hs always been hoping to work with 9ice on a few projects, adding that when the opportunity  to have him on his new single showed up, he could not resist  the feeling of working with one of the most celebrated Nigerian artistes.

“I am super excited about what the year has for me. I am glad about my new song with 9ice, which to me is the beginning of something good things to come. I am happy that my fans have been asking us to drop the song. I would not have come this far without the support of his fans; they hold a special place in his heart and this new song is for them,” he said.