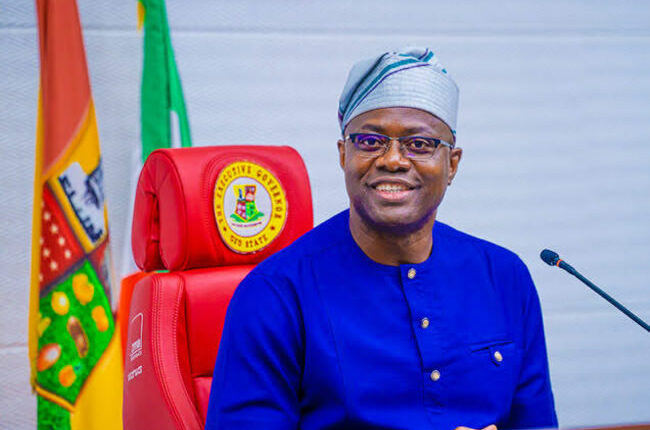 Oyo State governor, ‘Seyi Makinde, has reassured the residents of Oorelope Local Government, Igboho, that his administration would complete phase one of Saki-Ogbooro-Igboho Road before the end of his first tenure.

Makinde added that the road was started as part of efforts to complement his administration’s agenda to connect all zones of the state, noting that the arterial road was to connect communities in Old Ifedapo to Old Irepo Federal Constituencies of the state.

According to him, fixing the road would help boost the economies of the area.

The governor had, while addressing the League of Imams and Alfas in Oorelope Local Government, stated that his administration embarked on the construction of the Saki-Ogbooro-Igboho road with a view to linking the Irepo/Oorelope/Olorunsogo Federal Constituency to the burgeoning economy of Saki, one of the commercial nerve centres of the state.

A statement by the Chief Press Secretary to Governor ‘Seyi Makinde, on behalf of the governor’s re-election campaign media team, indicated that the governor had also, while meeting with traditional rulers in the council, declared that his administration’s desire to link all zones of the state has been on course.

The governor explained that he has connected all zones of the state in line with his commitment to build infrastructure that targets the economy, noting that he has also begun to link towns within zones, as exemplified by the Saki-Ogbooro-Igboho Road.

The governor, who had earlier campaigned in Igbeti in Olorunsogo Local Government, where he indicated that he has achieved more than 80 per cent of the promises he made to residents of the state, said that things could only get better under Omituntun 2.0.

According to Makinde, his promises to stop the payment of all fees in public schools, improve security and lift residents from poverty to prosperity have all been fulfilled, noting that by 25th of January, it would be 44 straight months since workers in the state have been receiving their salaries on the date already tagged GSM Date.

He said that going by the consistency of his administration in paying salaries on the 25th, at least N100 million will enter the economy of Oorelope at the end of January owing to payment of salaries to state and local government workers.

According to the governor, who also met with the Christian Association of Nigeria (CAN), the League of Imams and Alfas and the traditional council in Olorunsogo, things have been great for Oyo State under Omituntun 1.0, with the establishment of Amotekun, building of roads, schools and Primary Health Care Centres but that greater things would follow if he is re-elected.

The governor equally rallied residents of Olorunsogo and Oorelope to elect Hon. Solomon Akinwale Akinwole as Senator, Mr. Husseini Ijabah as House of Representatives member, noting that if they are elected, they would be able to cooperate with the state government to attract more dividends of democracy to the state.

While speaking with the Muslim community and the Isese community, the governor noted that he believed in fairness to all religions and that he has been fair to all religions in the state.
The governor equally told traditional worshippers that under Omituntun 2.0, their demand for equity would be considered and that they would be given concessions on various issues.

While addressing the traditional rulers in Oorelope Local Government, the governor declared that he had nothing against Igboho, where his former Deputy Governor hailed from, noting that whatever happened between him and the former Deputy Governor would never be allowed to rob the town of development due to it.

Addressing the community’s demand for a higher institution, Governor Makinde said he would invite the traditional rulers and the community leaders to discuss, stating that he is not the kind of person that would make promises that he has no intention of fulfilling just because he is seeking office.