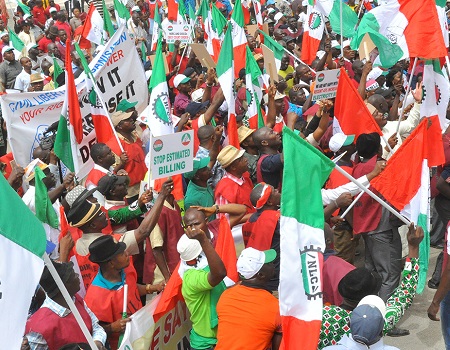 The first President of Nigeria Labour Congress (NLC), Comrade Hassan Sunmonu, has declared that stakeholders in the labour movement, as well as Labour sector,  should not allow the NLC to disintegrate.

The call was made as some notable affiliates of the NLC, under the United Labour Congress (ULC), are striving to be registered as a separate Labour union.

But Comrades Sunmonu and Emmanuel Ugboaja declared that those affiliates, who have left the NLC fold after the crisis that followed the 2015 National Delegates’ Conference the NLC would be brought back to the fold.

Speaking at the on-going 2019 NLC National Leadership Retreat in Enugu, Comrade Sunmonu, stated that in reality, there is no other Labour centre in Nigeria than the NLC.

Giving his goodwill message, Comrade Sunmonu said: “I am glad that NLC under Wabba is going to a new height. As the first President of NLC, I am proud to associate with this NLC leadership. It is easier to get to the top but very hard to remain there. I am ready to accept the call of the NLC at any time.

“The NLC is the only centre, any other labour centre is a counterfeit, there is no other centre than the NLC in Nigeria. We have our people who were trying to leave, we are not going to fight with them; we are going to bring them back. You as unions should organize and not antagonise, and you must stand by the truth at all time.”

He admonished the followership in the labour movement to stand by and believe their leaders.

Also in an interview with Tribune Online, Comrade Ugboaja, the new general secretary of the NLC warned that it would be suicidal for Labour to break up, while capital is consolidating by merger across the world.

He said: “Clearly, one determination would be to relate with our brothers; we have never stopped relating, it is only that the formalization has been a challenge. We will continue to move in the direction of where we would not only be one family, but people’s perception of us as one family will also match the reality.

“I know my brothers will see it in that light and clearly, it is going to be easier for us to formulate a working relationship, to formulate a clear platform to operate harmoniously to be able to confront capital. If capital is consolidating by merger we can’t be seen to be breaking up. If capital is consolidating across borders, we cannot be seen to be breaking up within borders.

“Your colleagues that left the fold about five years ago accused the NLC of hardline posture, not ready to shift grounds on the issue. You were to hold a joint May Day this year, but a day or two to the event, they said you are not ready for any kind of give and take arrangement. Do we continue like this or find a way forward?

As the new general secretary of the NLC, Ugboaja assured Nigerians that he would do his best to ensure that the issues are resolved and their colleagues in the National Union Electricity Employees (NUEE), the Nigeria Union of Petroleum and Natural Gas Workers (NUPENG), who left following the 2015 crisis back.

“I am going to work hard in that direction as I said, the truth is that you are relating with unionists that have heavy capacity in negotiation, in bargaining. We all share the same fears of the workers being swallow and that common determination will have us work together,” he said.

Ugboaja added: “We are not going to achieve much if we are pulling in different direction if we are not holding each other waste in this thug of war. I would do my best because there is nobody in any of the two leaderships that, I cannot have breakfast, lunch or dinner with.”