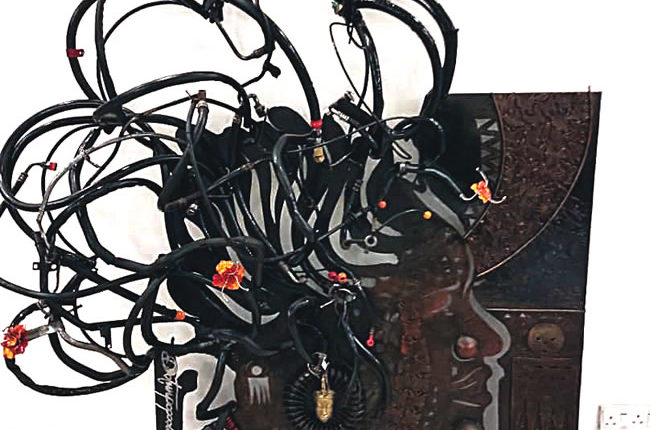 Pejoratively called welders, the forthcoming exhibition highlights what welded metal artists are all about.

Though they produce exquisite artworks, some people derisively call metal artists ‘welders’, a description for street artisans. But they are not artisans. A lot of critical thinking, reflection and painstaking effort goes into their end product which is not utilitarian like that of welders. Their works are objects of beauty which many seek but cannot afford. Also, while the sound they produce in the course of making artworks equates noise to some people, others, like Thought Pyramid promoting the show, say it is music.

“The inspiration of Ajorin; Dancemetalphor, is a musical allegory that should not be seen as a reaction,” began Centre’s curator, Ovie Omatsola at a preview last Saturday. He continued: “Since we want to believe those who use the aforementioned aphorisms of ‘welders’ and ‘noise’ are not stakeholders or art lovers with sufficient understanding of the creative industry. Ajorin; Dancemetalphor should be seen as a proactive response to purify the reputation and future of this remarkable sub-genre. In a professional context, welded metal artists should be rescued from being confined into the erroneous tags of ‘regular welders’ and ‘noise’ creators.

“At Thought Pyramid Art Centre, we interpret the sounds from the sparkles, iron clanging, and electrons burning processes heard when a typical metal artist is creating works. The calming musical ambience from metal art creation, as far as we are concerned generates rhythmic melody, only if you can listen and not just hear.”

Omatsola further noted that the exhibition was necessary “to show people in the local art community that only metal sculptors can create distinctive metal sculptures/arts that are interesting and exciting, special and heavenly. It focuses on educating, re-orientating, and informing the public while simultaneously entertaining them.” 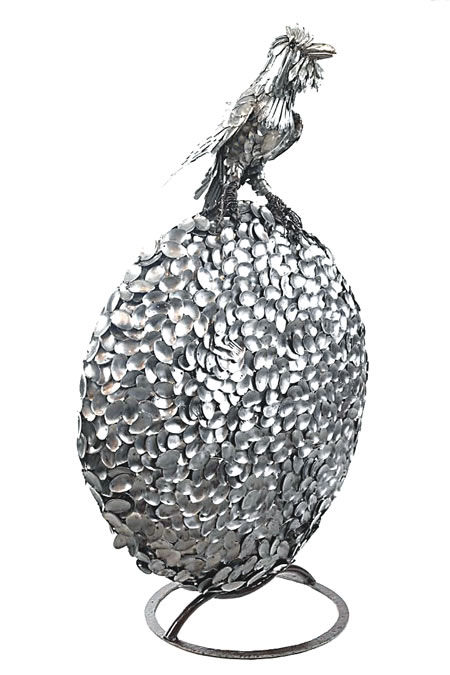 The exhibition showcasing 20 metal sculptures from the five artists will start with a VIP viewing that’s strictly by invitation. The public will then have the opportunity of viewing the works from December 7 to 20. Provisions have also been made for people unable to make it to Thought Pyramid Art Centre with a virtual show. This will be on from December 17 to January 31, 2021, on www.ajorindancemetalphor.com.

Elegance Gallery, Nigeria Machine Tools and VBank are supporting the exhibition that Balogun, a PhD holder in Sculpture, disclosed has been two years in the making.

Responding to a question about competition among the exhibiting artists as they work in the same medium, Balogun said there was no need for that.

The artist, some of whose works for the show include ‘Supreme Mechanism’ and ‘Drum of Honour Series’ said “modern artists are striving for uniqueness. There’s no need to compete with anybody. There are lots of ideas and materials we can work with and when it comes to the rendering, we also have unique approaches. We have unique interpretations. There’s no competition.”

Speaking in the same vein, Ekpenisi showing ‘Enigma’ and ‘Decadence of the society’ among other works agreed. “There won’t be a need for this exhibition if we were not united. There’s no need for competition; I didn’t even think about it.”

Art lovers eager for the opening of ‘Ajorin; Dancemetalphor’ are right to be excited. The exhibiting artists are some of the country’s best in the welded metal sub-genre and are set to delight viewers.

Balogun, for instance,  has staged over a dozen solo exhibitions, executed several public monuments and won many awards. He has participated in several conferences and art residencies within and beyond Nigeria. He is predisposed to interrogating found-materials or discarded elements peculiar to his host community during residencies.

Though he is renowned for manipulating and appropriating unusual materials as a sculpture medium, his artistry transcends the genre of sculpture.

He explained: “I explore disused objects or materials in my studio practice, neither due to shortage of fresh materials nor lack of resources to work with. Instead, I recognise the need to respect the inherent value of every creation and transmute it in the realization of objects of contemplation and critical engagement without being devoid of aesthetic value. I “rescue” disused/found objects that are at times regarded as a menace as a way of giving them a new lease of life and meaning through my studio practice. They function as a stimulus for my creative engagement; thus, my artistic practise straddles the employment of a myriad of materials, processes, and deliberations.”

Odogwu, also called ‘The Prince of Metal’ holds a Higher National Diploma in Sculpture from Federal Polytechnic, Auchi, Edo State. He worked with a renowned master sculptor, Ben Osawe from 1988 to 1989. His ability to transform metal and make it look like paper has made him a favourite of numerous collectors globally.

Though Ekpenisi studied sculpture at Federal Polytechnic, Auchi, where he graduated as the Overall Best Student, his journey as an artist began at the age of five. He trained himself without knowing where it will lead him. Most times, he destroyed and used his parents’ gadgets for his artistic experiments.

The common denominator in his works over the years has been the strict attention to intricate details and elegant features. Ekpenisi works with discarded metal plates, rods, stainless steel, mild steel, scrap metal, and disposed cans. His sculpture is usually life-size or larger than life in both figurative, imaginative, animal, and semi-abstract.

Abinoro, also an Auchi product, has been experimenting with cutlery for eight years. He draws inspiration from his environment, depicting these experiences with sculptures rendered in stainless steel cutlery, fibreglass and bronze. By repurposing materials, he gives new meaning to them.

Popoola is a synergetic metal sculptor who has carved a niche for himself with his monumental metal sculptures. He gained his degrees in Fine and Applied Arts at the Obafemi Awolowo University, Ile Ife. He is passionate about touching lives through his artistic and leadership skills and turning trash to treasures.

Popoola facilitates art workshops for students, professionals, NGOs, healthcare institutions, rehabilitation centres and schools locally and internationally. He has executed several monumental sculptures and large murals both in Nigeria and the United States of America. His body of works has addressed the issue of waste management and conservation, infrastructural decay, and the need to repurpose and reuse the wastes that make the environment unsightly and threaten the ecosystem.

LAUTECH and the war postponed