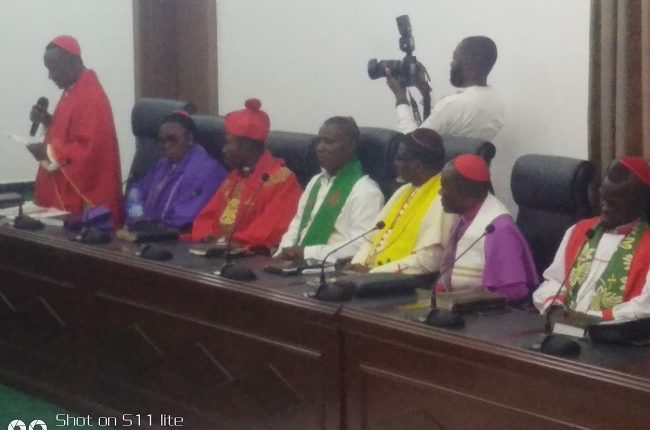 The Kogi State Governor, Alhaji Yahaya Bello, has promised to sustain the achievements recorded by his administration in the fight against kidnapping, armed robbery and other violent crimes in the state.

The Governor stated this in Lokoja, on Tuesday, when he received members of the Kingdom of Father’s and Mother’s Global college of Bishops and clergies Network international in his office, led by their leader, Archbishop Dr Peter Ogareki.

The governor noted that all inherited Security challenges, infrastructural decay and disunity he inherited on assumption of office in 2016 have been addressed headlong, saying that with the concerted efforts of the people, he was able to ensure religious harmony in the state.

While commending President Muhammadu Buhari’s effort aimed at fixing Nigeria, Bello noted that Nigeria was divided along with religions, ethnic and other divisive tendencies before the APC government took over the leadership of the country in 2015.

“We have been able to ensure a more united prosperous, secured and more Progressive Kogi State under my administration. The president is also doing his best to fix long years of decay in the country. Before the president came to power, Nigeria was divided along with religions, ethnic and other divisive tendencies. But the president is doing his best and require the prayers of all of us.”

On the 2023 presidency, Governor Bello noted that there has been pressure on him by youths, leaders across the political divide, religious leaders and opinion leaders to run for the presidency, but however, said the issue of the next president of Nigeria is in the hands of God.

“The youths, women, political leaders from different political parties have been mounting pressure on me to run for the presidency in 2023. But all I can say is that the issue of who will be the next president of Nigeria is in the hands of Almighty God. My becoming Governor was divine. I am a strong believer in God. Let’s pray that God will choose the next president for Nigeria.

“God is going to show us the way to follow in the days ahead. We prayed that God will give us a good leader in 2023, who will build on the legacy of President Muhammadu Buhari.”

Earlier, the leader of the team, Archbishop Dr Peter Ogareki, said they are in the state to pray for the governor and the people of the state, for God’s protection.

According to him, the stand of the governor on serious national issues have been very outstanding, saying that Governor Bello’s stand against a second lockdown owing to the second wave of the COVID-19 pandemic has saved the country from another recession.

The group promised to support the governor in prayers for the 2023 presidency, saying that the country required a focused, determined, result-oriented and a detribalized leader in 2023.

We will sustain the fight against criminality in Kogi

The last time Nigeria recorded such a low figure was in the December 27 to January 2 week, when it reported 5,681 cases…We will sustain the fight against criminality in Kogi