In this report, LEON USIGBE writes that the condition of living in Internally Displaced Persons camps remain poor with most of the IDPs, numbering over two million scattered all over the country and beyond needing better sanitary conditions and finances, while many families remain cramped together in small rooms. 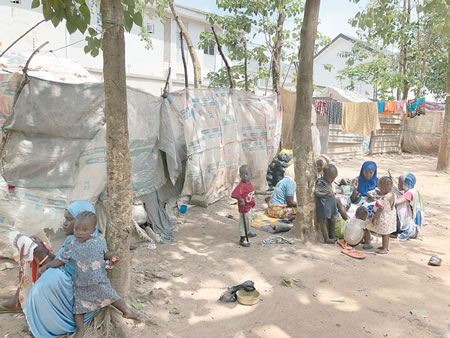 THE North-East of Nigeria, where the Lake Chad shares borders with other neighbours has in the last few years become an endangered zone. The number of Internally Displaced Persons runs into tens of thousands due to insurgency, just as many people had become jobless as a result of climate change which had caused the Lake Chad to reduce in size considerably.

“The declining lake has done farmers and fishermen out of their jobs, who have been recruited into armed groups such as Boko Haram and Islamic State, fuelling the ongoing violence that blights the region,” writes Oli Brown, an associate fellow with the Energy, Environment and Resources Department of Chatham House, London, and Janani Vivekananda, a senior advisor on climate change and peace-building, for the Berlin-based think tank, Adelphi.

The effect of a military action on the terrorists by an international joint multinational task force of troops from Nigeria, Niger, Cameroon, Chad, and Benin Republic is yet to be seen as peace continues to elude the region.

“With around 4.5 million people in the basin being severely food insecure, there is a need to rigorously address the cause-and-effect relationship between the environment and human security,” Erik Solheim, Executive Director UN Environment, noted recently.

Trying to cope with internal uprising of its own, in January 2019 Cameroon began to forcibly repatriate refugees who fled the volatile Lake Chad region back to the area. They include some 9,000 Nigerians who fled the town of Rann after an attack by Boko Haram terrorists. The Norwegian Refugee Council (NRC) in a July 2019 report observed that nearly two million Nigerians are currently displaced across three Nigerian states around the Lake Chad region and another 226,000 have become refugees across the borders in Cameroon and Niger.

The United Nations High Commission for Refugees (UNHCR) also noted that there has been an increase in the flow of the IDPs with over 6,000 people recently forced to seek refuge in the Lake Chad region. Tens of thousands of IDPs were already sheltered in Maiduguri, Abuja and other cities around Nigeria, in conditions of lack of good accommodation, food, water, and sanitation.

“The accommodation here is not good for decent human beings,” Hajara Abubakar Maicase, a 32-year old IDP from Gwoza in Borno State told Sunday Tribune at the Durumi IDP camp in Abuja. The mother of five fled her town in 2014 and has lived in the camp since then with her family.

“I was a tailor in Gwoza before we fled from Boko Haram. My business was doing well. Look at me now. We ran away after Boko Haram killed five members of our family,” she added in tears. Hajara is desperate to leave the camp because of its appalling conditions. “Adults and children are crammed in the same room,” she said, adding that the relief items they get are hardly enough to care for the displaced persons.

Liatu Ayuba, who heads the women’s group in the camp, is also the midwife overseeing the deliveries of new babies. She has lived in the camp with her four children since her husband was killed six years ago by Boko Haram terrorists during an attack on Customs Barracks, Mashamari, also in Borno state. She is worried that parents and their grown-up children are made to live in the same room in the camp.

“Adult children of over 18 years are sleeping in the same room with their parents, observing everything they do including when they make love,” she lamented, concluding that “It is painful, and it makes me cry because this is what leads to sexual abuse of young girls within the camp.”

The IDPs are craving for better living conditions; they feel that having abandoned their original means of livelihood, they need to acquire new skills to enable them to fend for themselves and families. They also desire education for their children who presently have no access to schools.

“I have eight children living with me here. None of them goes to school,” Zainab Abdulhamid, 32, who fled Gwoza after losing her father and brother to the Boko Haram insurgency, told Sunday Tribune, saying “We have no hope here. We want to go back home.”

The Nigerian IDPs rely on relief materials from government agencies including the National Emergency Management Agency (NEMA) as well as Non-Governmental Organizations (NGOs), which have found their resources thinly spread because of the huge number of the displaced persons needing humanitarian assistance. In July 2019, the IDPs sheltered in a camp in Taraba state protested over what they saw as diversion of relief materials initially allocated to their camp.

“IDPs in Taraba State are suffering from hunger, disease and other related hardship in their various camps and we wonder why the items provided for the IDPs would be diverted to another state,” Kini Nemori, Chairman of the IDPs forum in the state told journalists.

Nuvarga Danhabu who heads the state-owned emergency management agency, however, denied knowledge of plans to move relief materials to another camp.

With enduring peace still elusive in the Lake Chad region, the IDPs must deal with the vagaries of everyday existence and can only hope that they return to their bases soon.

“Give us skill acquisition training, jobs and put our children in school. We can then take care of ourselves,” Sani Audu, a 30-year old man who fled Gwoza appealed.

Daniel Soetan, National Coordinator of Goodwill Ambassadors of Nigeria (GWAN), an NGO involved in distribution of relief materials to the IDPs, told Sunday Tribune: “What government should do now is to integrate them (IDPs) into the system by giving them skill, empowering them to start some business or farming so that they can take care of their families.”

The Nigerian National Commission for Refugees, Migrants and IDPs (NCRMI), the lead agency charged with the welfare of the IDPs, maintained that the durable options available to the IDPs are either to go back to their previous place of habitation when their safety can be guaranteed or be resettled in other amenable communities and be locally integrated into such host communities where they are unable to go back to their places of origin.

The NCRMI maintained that it has embarked on massive empowerment of the IDPs through the provision of livelihood support items and skills training, “so that beneficiaries can become independent and productive members of society. We believe that fostering self-reliance is the surest way for a person of concern to achieve durable solutions.”

The Governors Forum of the Lake Chad Basin are agreed concurred that the solution lies in heavy investment in basic education, skills acquisition, vocational training and job creation across communities in the basin, which should target youth, women, victims of conflict and vigilante groups.

In its report after a recent dialogue, the forum recommended that it was going to “Invest in infrastructure, particularly road networks, electricity, drainage and irrigation systems, which all have wide-ranging economic impacts.”

However, for the IDPs, a quick solution to the insurgency in the Lake Chad region leading to an enduring peace is all they want to see, so that they can restart their lives in earnest.