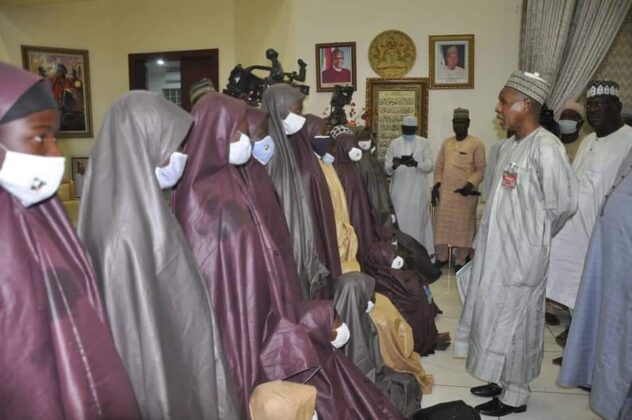 Twenty-six Katsina women rescued from kidnappers said they were forced under gunpoint to trek for 3 days inside the bush before finally getting to the kidnappers’ den.

The middle-aged women and young girls who were rescued by neighbouring Zamfara State authorities said their village, Dan-Aji in Faskari Local government area was attacked by the bandits and after killing several people, they were kidnapped.

“We have never witnessed terrible times in our life, like what happened that day, said Nusaiba one of the kidnapped women.”

Masari called on the security agents to fish out and deal ruthlessly with unrepentant bandits, saying that his government will never negotiate with bandits again.

“Any of them who wants to negotiate should negotiate with the security.”

The governor assured the public that the primary responsibility of the government is to protect peoples lives and property, he, therefore, reiterates his government’s commitment to shield the citizens from criminals.

In his remark, Alhaji Abubakar Dauran, the commissioner for security and home affairs of Zamfara State who conveyed the kidnapped victims to Katsina said the women were rescued with the help of some repentant bandits.

“The intervention of Zamfara State Governor has always led to the freedom of abducted citizens without the payment of ransom by any party.

“Through his dialogue and reconciliation process, several groups of armed bandits have laid down their arms and embrace peaceful coexisting in the state.”