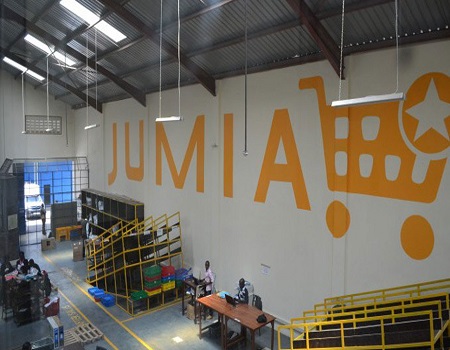 Jumia Technologies AG on Tuesday announced that it has recorded a total number of 4.8 million active consumers as at June 30, 2019.

This growth is against 3.2 million active consumers recorded a year ago.

According to the Co-Chief Executive Officers of Jumia Technologies AG, Sacha Poignonnec and Jeremy Hodara, the company recorded a gross profit of €17.3 million, increase for the second quarter of the year which ended on June 30, 2019.

According to the Q2 report, the technological firm’s Gross Merchandise Volume (GMV) increased this quarter by 69 per cent compared to 58 per cent in the second quarter of 2018.

According to Jumia, strong marketplace growth and robust consumer acquisition and re-engagement momentum contributed to the company’s growth.

While its gross profit soared to €17.3 million as against €8.9 million recorded in the corresponding period of 2018.

The company also confirmed the sacking of its three top management staff (names undisclosed) after discovering inflated sales figures in its Nigerian business.

“Jumia has continued to deliver on its financial strategy of generating strong growth of its topline drivers while accelerating monetisation, the driving cost efficiencies.

“Developing JumiaPay has remained a key focus area, and is now offered in six countries which include Nigeria, Egypt, Ivory Coast, Ghana, Morocco and Kenya.

“These results reflect our continued focus on offering a relevant and engaging online shopping and lifestyle destination for consumers while providing our sellers with an attractive value proposition and a platform to grow their businesses.

“Despite the challenges in the economy, we remain focused on all aspects of our growth strategy, particularly JumiaPay, as we continue to drive its usage in our markets.

“We received information alleging that some of its independent sales consultants, members of the company’s JForce program in Nigeria, may have engaged in improper sales practices, while adding that it identified several JForce agents and sellers who collaborated with employees in order to benefit from differences between commissions charged to sellers and higher commissions paid to JForce agents.

“JForce is a decentralised sales force with dozens of thousands of agents which allows Jumia to physically interact with consumers.

“We have terminated the employees and JForce agents involved, removed the sellers implicated and implemented measures designed to prevent similar instances in the future,” the CEOs said.