We have made arrests over Ibadan serial killings —Oyo CP, Enwonwu 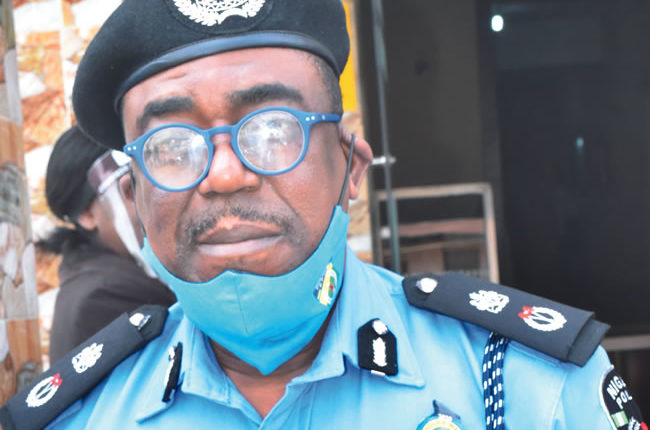 Oyo State Commissioner of Police, Mr Nwachukwu Enwonwu, in this interview by FEMI OSINUSI, speaks on his plans to scale up the policing of the state, the Amotekun security network, among other issues bordering on security.

How would you describe the situation in Oyo State as regards policing since your assumption of office a few weeks ago?

Since I assumed duty on the 1st of June, 2020, I have done my level best in spite of the hurdles I met, and in line with the directive of the Inspector General of Police, IGP Muhammed A. Adamu, who charged me alongside other commissioners of police to make sure that we stem crime wave in our respective states of command. Since my assumption of office on June 1, I have been busy passing the message across the state command, to the divisional police officers, the area commanders, the heads of sections and departments, as well as the general public that there is no room for criminals to operate in the Pacesetter State, Oyo. I have charged each and every one of them not to be armchair divisional police officers or formation commanders; they have to move out; they have to ensure visibility policing; they have to do everything humanly possible and within the ambit of the law to make sure that we clear away criminal elements in Oyo State.

So far, so good, the crime rate, from the situation report we have been receiving, has been at a tolerable level. We will make sure we continue to work on it and reduce it to the minimum.

Of recent, the spate of insecurity in the state seems to be on the increase following some killings, rapes and other criminalities, especially in the Akinyele area of the metropolis. How are you handling the situation?

On assumption of duty, I met a situation where killings began to raise their head and we did not sleep. I had to relocate my office to that Moniya/Akinyele area. I want to assure you that as we speak, in some of those killings, we have even made arrests and the investigations have really gone far. This is not the forum where I would tell the public what we have done but I want to assure the public that at the end of the day, we are going to come out with very positive results that will satisfy all the people of Oyo State. We are not resting on our oars.

As a matter of fact, crimes that border on rape and killing are usually perpetrated by individuals. It is not as if it is a gang thing where you have gangsters sit down and say, ‘we are going to kill’ or ‘we are going to rape’. That is not what we are experiencing. From the information we have been getting, it is a one-man thing. Whether it is a serial killer, investigations will reveal that. But we have made arrests. When I assumed duty, I told them [police officers and men] two things. One, I would not tolerate violation of human rights vis-a-vis incivility to members of the public. We have to be professional. With that, we will win the trust and confidence of the larger public. Secondly, I told them that they must observe the rule of law and due process. In a situation, you don’t just jump to conclusion that this person is a killer. You need to follow the due process. That is the tool we have been trained on, on how to unearth violent crimes or lesser crimes so that at the end of the day, there won’t be cause for criticism from members of the public that maybe because we want to make a mark and we now bring and present them as killers. We want to have credible evidence that we would use in presenting the offenders or the culprits and prosecuting them so that at the end of the day, they won’t escape the wrath of the law. They will face the music for the offences they have committed.

You are known to be one of the officers who investigated the Bola Ige murder case. Can you give us a glimpse into what happened during the investigation?

As a matter of fact, that is a long, old story that I would not want to go into. It is there in the archives for people to access and find out how the case fared and how it ended.

What are your plans to end the perennial clash between herders and farmers in the Oke-Ogun area of the state?

We need to partner with the public. They need to be sensitised. A lot of them hoard information. Maybe they find it difficult to pass information to us because they are ignorant or because they are scared. It is part of the reason I have visited the Nigerian Tribune; to help us sensitise the public, especially at those farm settlements and rural areas that should they, in the course of their transactions, or in the course of doing their farming, see invaders or strange-looking faces, they should not hesitate to alert us. They should inform the nearest police station, or any security agent or agency in that domain, who would quickly call our attention to manage the situation.

As a matter of fact, I have visited the Hausa/Fulani community in Ibadan and their leader assured me that he was a very law abiding person who had spent so many decades in Ibadan; that he could never be part of unlawful activities. He told me in the presence of his chiefs and elders from the Hausa/Fulani community that they were ever ready to assist the police. They made it abundantly clear that they could never associate themselves with acts of terrorism or provide cover for these rustlers who call themselves herdsmen. And I seem to believe the Sarkin Hausawa. This is not the first command where I would work. I have worked in Akwa Ibom, Bayelsa, Delta and Rivers states. This Miyetti Allah would tell you that there are two types of herdsmen: the herdsmen that have been living with the people for so many years, who have never had clashes with the people. Those ones would hardly carry firearms. The much you can see with them is their stick or their dagger or bow and arrow, just to secure themselves. And these are not the type that would lead their herds into people’s farmlands. There is another sinister group. Only God knows how they entered Nigeria. They [Miyetti Allah] would tell you that they strongly believe that these people were not Nigerians; that maybe they are from other West African countries. Those are the ones that would carry dangerous weapons like AK-47 rifles. I believe, too, from the Miyetti Allah I had met in those states, that these are the ones that would wear military camouflage. How they got it [the military uniform] we do not know. Maybe they are an offshoot of Al Shabaab. And they are the ones involved in armed robberies and kidnappings. So, in each of those places, I pleaded with them: ‘If you sight that type of Fulani people, don’t confront them because they will shoot you with those dangerous weapons. Just give us details, their location and how we can deal with them’. We have succeeded in a good number of cases. Sometimes in such operations, we don’t work alone; we involve the DSS, as well as the military for support so that we can cordon the place and make sure there is no escape route for them.

These are the sets of hoodlums that I believe do cross-border banditry. They come, they strike and once you are on their trail, they move to the other side of the border.

The South-West states have formed their own security network called Amotekun. What is your view about that? Is there any plan by the police to synergise with Amotekun when it begins its operation?

I will have to reserve my comment on that until I go through the documents concerning Amotekun. After going through the documents, I would link up with the police headquarters and then I would now know the direction to go. But I must say that we work closely with the vigilantes and others who are on the side of the law. So, once anybody is there to support the police, we would always encourage that. Where we might find it difficult working with any group is when such a group is working at cross purposes with law enforcement. There is no way anybody would want anarchy or want a situation where people would be brutalised or people’s rights would be denied or jeopardised.

Heartburn while lying down

Presidency has denied us our dues in Benue —Ortom

Why North is determined to get back its old glory —Tanko