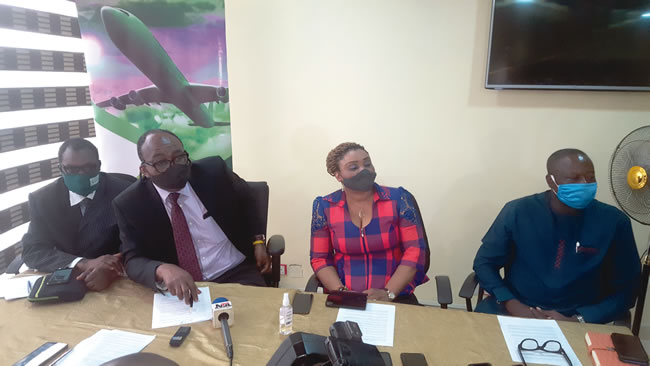 Recently, the National Association of Nigeria Travel Agencies (NANTA), Mrs Susan Akporiaye in a press conference on the state of the association speaks on the current business trend, Federal Government’s intervention on COVID-19 and other issues, WALE OLAPADE brings details.

The COVID-19 pandemic and the subsequent lockdowns have done more harm to the global tourism and travel industry, however, countries in their wisdom took different steps to meet the demands of the stakeholders who were directly affected.

In Nigeria, the national president of the National Association of Nigeria Travel Agencies (NANTA) through series of interventions and direction to keep members focused, Mrs Susan Akporiaye has been a able to weather the storm of the unexpected trend of business occasioned by COVID-19.

The NANTA president, in her first quarter of 2021 state of the association press briefing describes 2020 as nightmarish, brutish, unexpected and fearful for its members.

According to Akporiaye, the Federal Government, through the ministry of aviation and the Nigerian Civil Aviation Authority, (NCAA), intervened to give NANTA hope and stabilise certain measures of policy matters which brought sanity to the rash of COVID-19 protocols targeted at Nigerian passengers.

She also appreciated government’s offer to provide the body with palliative, which she said gladdened her heart that travel professionals, represented by NANTA, are veritable partners in national development.

“We must salute the courage and doggedness of Senator Hadi Sirika, the Minister of Aviation on a lot of fronts in repositioning the industry and the travel trade sector. Mr Sirika is the true square peg in a square hole and NANTA salutes this exceptional public officer,” she said.

On the NANTA palliative, Akporiaye said the committee will come up with a sharing baseline for every financially up to date NANAT members and those certified by the Nigerian Civil Aviation Authority (NCAA).

NANTA president observed that this is the first time in the history of the body that the Federal Government openly identified with its pains dreams and aspirations.

She disclosed that some of NANTA members are yet to send in their financial details for the disbursement of the palliative.

On forex transaction, the NANTA president noted that it had been challenging meeting its obligations to the International Air Transport Association (IATA) as it has been having issues with access to foreign exchange from the Central Bank of Nigeria through its bank, UBA.

According to her, “for over three months now, the collective dues of members has been with the bank, and what they were seeking $60,000 to remit to IATA.

Akporiaye explained that out of $60.000 it applied through its bank for repatriation to IATA, UBA sometimes released a meagre $4000 and sometimes $2000 which is very ridiculous.

She also lauded IATA for making the travel process easier, giving their members enough time to meet up with their financial obligations instead of yanking them off on its platform. “IATA has been lenient to its members in their payment process which has been threatened by the insufficient Foreign Exchange by the CBN.”

“We are working round the clock to provide more services and opportunities for our members, particularly in reaching out to our various stakeholders to provide windows of opportunities and support to NANTA members at this critical times.

“We also like to urge our members to be patient and not cut corners to remain above the waters. In weeks to come, we have instructed our training committee to come out with training modules beneficial to our members as we take bold steps to engage alternate openings which can help us provide better services to Nigerian passengers and our members.”

Travel agencies in Nigeria recorded a total of $151.09 million revenue from ticket sales in the first four months of 2020, a 45 per cent drop compared to $282.36 million generated in the same quarter of 2019.

This marginal drop which was linked to the COVID-19 lockdown, Akporiaye described the pandemic’s impact on global travel and the consequent impact on Nigerian travel trade sector as the road to Gethsemane, adding that it was unexpected and fearful.

Giving the revenue analysis of the ticket sales, Akporiaye said for 2019, travel agencies recorded revenues from ticket sales of $57.79 million in January, $51.52 million in February, $80.55 million in March and $92.59 million in April, giving a total $282.36 million for the four months in review.

According to the NANTA president, the minus $1.38 million was a deficit for that month. The BSP recorded more refunds than new sales in April. So it became negative.

Although she frowned or people presenting false PCR tests, she observed that Dubai can adopt the Canada style where any passenger that test positive on arrival will have to pay $2000 for their treatment.

She observed that the test is becoming too much as the PCR test done 72 hours from the date of departure by passengers and the one done on arrival in Dubai is okay.