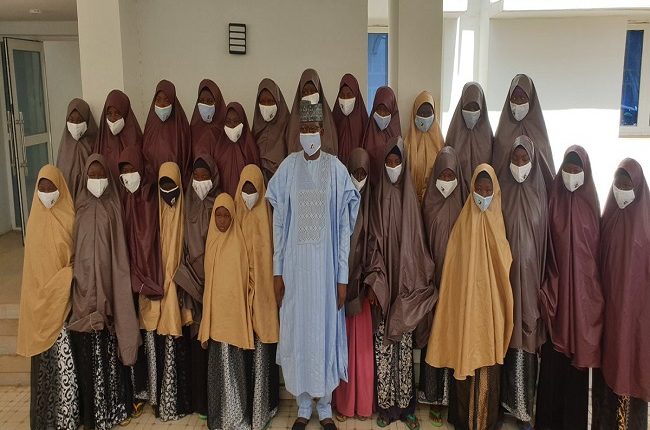 Zamfara State governor, Bello Matawalle has debunked the news trending on the media that N6. 6m was paid for the release of the 26 girls.

In a statement issued by the Special Adviser on Media and Communication, Zailani Bappa on Tuesday, the governor noted that misguided individuals are spreading false and fabricated information.

He said the avoidance of doubt, his government made frantic efforts to rescued them from the bandits, unfortunately this laudable efforts were not appreciated.

The statement noted that to the chagrin of the governor, ‘the story that went viral of the efforts of Governor Bello Mohammed in securing the lives of these young souls and handing them over successfully to Governor Bello Masari was however received with bitterness by enemies of peace and obviously, bitter persons who will wish hell loose than Matawalle’s name to soar high.

‘These misguided persons have since instigated false information that the girls were not rescued by the peace process initiated by Governor Matawalle administration but by ransom paid(N6. 6m)by the families of the released girls.

‘ However, the fact remains that the rescued girls were not released on ransom as the genuine families of the girls have since denied the false story.

‘His Excellency, Governor Bello Mohammed has never taken any step in the last one year and five months to score any cheap political goal but simply doing his assigned job which he swore to do.

‘ Indeed, any iota of dishonesty in his intent or approach would have woefully failed and put the state in jeopardy as it happened to those leaders preceding him.

‘Governor Bello Mohammed notes with satisfaction that God has always vindicated him from such machinations and will continue to do so as his only aim so far is to discharge his onerous task of securing lives and property of all Zamfarans and not to deceive them.

Recall, the village Head of Dan-Aji, Lawal Dogara, after the released of the girls has came out to disclosed to newsmen in Katsina on Monday that the families of the adopted girls paid N6. 6m before they were released .
NIGERIAN TRIBUNE

2023: My mission is to rescue, rebuild Zamfara ― PDP gov candidate