We deserve respect for our hard work instead of harassment, says Buhari 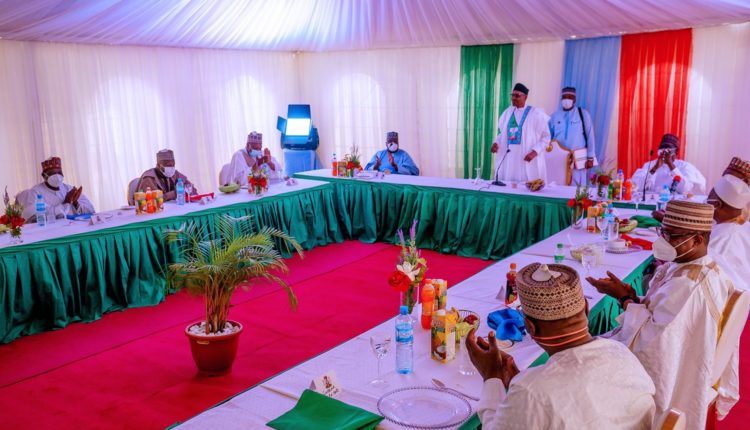 President Muhammadu Buhari on Saturday said that rather than be rated and get praises for the work his government is doing, the elite of the country prefer to harass him.

He spoke after at a lunch with APC governors after his revalidation of his membership of the party in his constituency in Daura, Katsina State.

The president based his assertion on what he said was the poor state of things his administration inherited and the fact that it had to make do with less resources.

He reiterated his stance that despite the amount of money available to past governments from crude oil sales, they left little to show for it.

The president, therefore, urged party members at the grassroots to defend his administration from the elite attacks.

He said: “The problem is that I will like especially the elite to please be reflective.

“When we came, where we were, the resources available from them and the condition of the infrastructure? I was constrained to go over it several times to tell Nigerians that between 1999 and 2014, let them check with the NNPC, let them check with the governor of Central Bank, the production was 2.4 million barrels per day, the average cost was $100 per barrel.

“So, for these years, daily, Nigeria would earn having 2.4 million barrelsx100 dollars everyday. But look at the condition of infrastructure, you know this better than I do. I know I went to every local government of the country in my three consecutive attempts to become the president. You know the road more than I do. You know the condition of the rail, the railway is dead. Now, look at it everywhere we go. What did they do with all the money?

“When we took over in the administration, production went down to about half a million barrels per day, the price collapsed. We had to do what is called a bailout, wherever we got the money from. Upon all the money from 1999 to 2014, we gave you money from the Centre to pay salaries.

“No, Nigerian elite are not interested in rating the competence but they are interested in harassing us with all efforts we are making.”

On the APC registration and revalidation exercise, President Buhari explained that the idea is to return the party to the grassroots, saying that the time of imposing candidates from Abuja or other levels of the party has become a thing of the past.

“Without any incentive, they must come out and defend the party at any level so that we, you and the party will feel secure and comfortable because the old time of putting hands in the pocket is over because the money is no longer available.

“You, who are in the field in charge of your constituencies, you have to make efforts to convince the elites to please give us the due relevance and respect we deserve that we are working so hard with limited resources.”