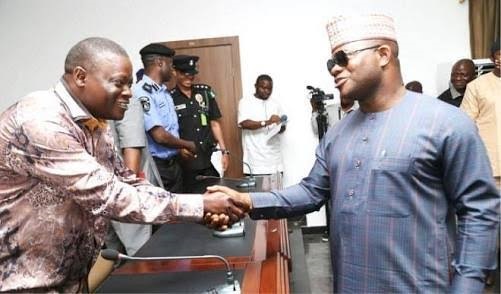 The Nigeria Labour Congress, (NLC), has expressed shock over the failure of the Kogi State Government to implement the N30,000 new minimum wage.

Kogi State Chairman of NLC, Comrade Onuh Edoka disclosed this, on Wednesday, when the new excos of the Nigeria Civil Service Union paid him a courtesy visit in his office.

Edoka noted that two years after a committee was set up by the government to improve the welfare of workers given the current economic reality, the committee is yet to submit its report to Governor Yahaya Bello.

Expressing dissatisfaction with what is on the ground, Edoka lamented that the union is under serious pressure from workers in Kogi State to see that the new minimum wage sees the light of the day.

He, however, assured that the union will not rest until the new minimum wage is implemented in Kogi just as it is applicable in other states.

His words ” Organised Labour in Kogi State is still in dismay over the none implementation of the N30,000 new minimum wage. After two years of setting the committee, they are yet to submit a report to his excellency. For how long are we going to continue like this. Workers have been patient and they have exhausted it.

“We are using this medium to call on the Kogi State Government to do the needful as things are getting out of hand given the current economic reality. The prices of foodstuff have skyrocketed and workers are still been paid with their old wages. This is not fair. Something urgently is needed to be done to cushion the suffering of our workers.”

Edoka, however, admitted that the Nigeria Civil Service Union is the oldest union form in Nigeria before the amalgamation of the North and Southern protectorates in 1914 adding that, they have produced intelligent individuals both at the national and state level.

The NLC Chairman, however, warned that the struggle will not be easy in the state for the union adding that they should ensure they maintain industrial harmony with the government in a bid to meet the yearnings of workers they represent in the state.

“The task ahead is enormous. It is important to state here categorically that you must put in your best to meet the demands of your union members. Do not betray the workers you are representing. If you do this, you will face the wrath of God,” he warned.

Earlier, the Kogi State Council Chairman, Nigeria Civil Service Union, Comrade Tony Obasa said they are in the office of Comrade Edoka to pledge their loyalty to the Nigeria Labour Congress, (NLC).

He tasked the NLC chairman to double his efforts at ensuring that the Kogi State Government implements the new minimum wage stressing that workers can no longer cope with what is given to them as their monthly salary.

In spite of the huge investment in the water sector by the government and international organisations, water scarcity has grown to become a perennial nightmare for residents of Abeokuta, the Ogun State capital. This report x-rays the lives and experiences of residents in getting clean, potable and affordable water amidst the surge of COVID-19 cases in the state.  We are still shocked new minimum wage has not been implemented in Kogi