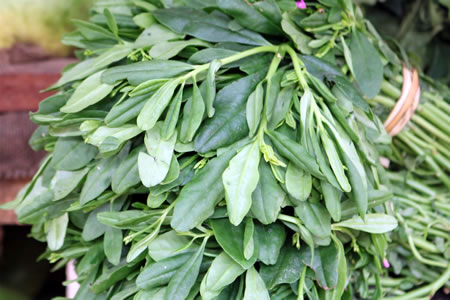 VEGETABLES constitute essential components of the diet by contributing nutrients and food properties that are important to human health. Increasingly, many people are turning to vegetable to also boost body immunity and blood levels.

Several researchers have reported the consumption of Ugwu (Telfairia occidentalis or fluted pumpkin) leaves for its ability to boost blood levels. But surprisingly, experts in a new study named waterleaf a better blood tonic than ugwu leaf.

Ugwu is a crop eaten for its medicinal benefits. It is used in the treatment of convulsion, taken to boost breastmilk production, immunity and fertility. It also has liver-protective properties as well as lowers cholesterol level.

Waterleaf, known as Gbure (Yoruba), Nteoka/inene(Igbo) and Alenyruwa (Hausa) is used as condiment, sauce, spice, softening of soups and for flavouring in foods. The leaves have been reported used in the management of cardiovascular diseases such as stroke and obesity.

According to folk medicine, waterleaf has been reported to be effective in the management of polyuria, internal heat, measles, gastrointestinal disorders, liver ailments and cancer.

This study designed to compare the blood building properties of waterleaf and ugwu was in animals. Fifteen Wistar rats were used in this study. They were grouped into three of five rats each. The 2019 study was reported the journal, Acta Scientific Nutritional Health.

Group 1 served as the control, group 2 and 3 were treated with ethanolic extracts of ugwu and waterleaf respectively for 28 days. Their blood samples were tested for haematological parameters such as red blood cell (RBC) and white blood cell (WBC) counts, packed cell volume (PCV) and haemoglobin (Hb) concentration.

The result showed that both plants increased these blood parameters when compared with control animals. However, the packed cell volume, red blood cell and platelets of animals treated with waterleaf were significantly higher than those treated with ugwu.

Also water leaf has a better ability to attack and destroy invading bacteria, viruses and other injurious agents than ugwu leaf. It is also better in thrombopoietin production as well as blood clotting potential than the leaf extract of ugwu.

They added: “It is, therefore, possible that the consumption of both plants by humans can help prevent anaemia, especially in menstruating and pregnant women.”

They reason that their actions on blood levels of red blood cell parameters might be attributed to their antioxidant activities.

Although the study justified the use of both plants as a blood tonic, they said rather than focus on the leaves of ugwu to boost blood levels, waterleaf could be a better substitute. The 2019 study was in the journal, Acta Scientific Nutritional Health.

Previously, researchers have reported jute leaf (ewedu in Yoruba, Ahihara in Igbo) as another vegetable to boost the body’s blood production.

Like ugwu leaf, jute leaf also contains minerals like calcium, potassium, iron, ascorbic acid and carotene. It is used traditionally for the treatment of dysentery, fever and gonorrhoea.

Also, researchers had said daily intake of Justicia carnea can offer a rich supply of iron and vitamins to boost blood level. They proved that Justicia carnea leaves possess blood-boosting properties more effective than many medicinal plants and well known Western blood tonics.  It is commonly called Hospital Too Far or Blood of Jesus but generally considered as an ornamental plant.

Using animal models, the researchers in the 2019 study published in the journal, Biomedical Research corroborated that its leaf possesses blood boosting and replenishing properties that enabled it effectively restore blood levels to normalcy within every a short period of treatment.

According to them, significant reductions in the levels of blood levels observed in anaemic rats were significantly reverted within four to eight days of treatment with the extract.

Moreover, foods that are rich in iron and vitamins are also used to beat anaemia and boost blood levels. These include beans, pigeon peas, spinach, green leafy vegetables, fish, oysters, and organ meat, such as kidney and liver.

The family as nexus to societal well-being (II)