WALE AKINSELURE, in this piece, takes a comprehensive look at the troubling waste burden in Oyo State, the growing commitment of the state government in tackling the menace and residents’ responses to the challenge. 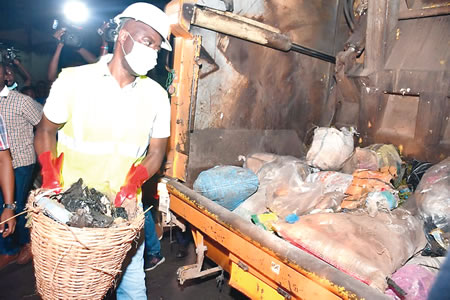 Seeing Governor Seyi Makinde at about 9pm in red rubber gloves, reflective jacket, nose mask, blue jeans, white tee shirt and lifting bags of dirt from the Mapo hall median into a truck signalled that there indeed was fire on the mountain that needed to be put out. For hours in the night, dirt was being taken off medians by Makinde and other government officials who had been assigned to 22 different routes across Ibadan, the Oyo State capital. Before setting out for the clean-up exercise, Makinde had acknowledged that the brown roof city was filthy with heaps of refuse constituting an eyesore and a fuel for an epidemic. Whether from Challenge to Agodi Gate, Dugbe to Molete, Sango to Ojoo, Ayegun-Oleyo or Boluwaji to Iwo Road, Academy to Odo-ona road, Yemetu to Total Garden, the medians had become an abode for heaps of refuse.

Coming on the back of a government which prided itself as having taken Ibadan from being once referred to as one of the dirtiest state capitals, the unsightly sights of refuse across the city already raised fears of the current administration returning the state to its past reputation of a dirty state. As each day passed since inception of the Makinde administration on May 29, heaps of refuse also continued to pile up. The heat was therefore on the Makinde government on its plans to ensure effective waste management. And, Makinde, on Monday last week, in acceptance of the reality, declared a state of emergency on solid waste management in Oyo state.

Right in Makinde’s presence, residents of the state, at a stakeholders’ forum on the 2020 budget, were loud in their call on government to address the waste management challenge that faced the state in the interest of healthy living of the people. Mr Olagunju Dairo of Ibadan South West Local Government Area had decried the litter on the median spanning the Idi-Arere-Beere-Oje area. Dairo had particularly pointed out that the litter included excreta because several houses on the Idi-Arere to Oje span did not have toilet in their houses. Dairo also warned that the state was at risk of epidemic and flood except it found a lasting solution to inefficient waste management.

Varied reactions greeted the decision of Makinde to personally lift waste into trucks. A market woman Mrs Monsurat Akinade described the governor’s move to pack waste himself as unnecessary, urging the state government to focus on ensuring the state has more waste collection trucks and order the arrest of persons seen dumping waste on medians and streets. “We thank the governor for coming out to pack the waste but what is most needed is more waste trucks. We don’t think it is necessary for the governor to be the one packing the waste himself. If there are more trucks moving, the litter will be lowered and more efficiently packed. We dislike the fact that it is the governor packing waste himself. We find the waste on medians disgusting as the stench is unbearable. We are interested in personally arresting whoever comes to dump waste on the medians and take such person to Mapo police station,” Akinade said.

Similarly, one of the leaders at Mapo market, Mr Taofeek Alade called on the state government to station signboards across medians warning against disposal of waste and follow such warnings with arrests. “We are unhappy that dirt litters our medians and streets. We already plan to arrest those persons disposing waste on the medians but we are waiting for the government to take necessary steps to give us that mandate to arrest defaulters. We dislike the fact that it is the governor himself that is packing waste. We want the government to station a signboard warning against the disposal of waste. With that we will be able to arrest those dumping refuse and take them to the police station,” Alade said. While saluting Makinde for packing the waste himself, Mr Tayo Agboluaje urged the state government to station receptacles and waste collection trucks at junctions not far from one another. “The governor has done well by packing the waste and I wish him success. We are unhappy at the dirt and especially its threat to our health. The government should station waste collection trucks and receptacles from one junction to the other,” Agboluaje said.

Other residents in conversations with Nigerian Tribune wondered why waste was not effectively removed from the streets as before. Mr Bolarinwa Ababa of Oke-Ado area of Ibadan bemoaned the stench that had subjected shop owners, their customers and passersby to having to put their hands over their nose.

“We don’t see those packing the refuse as frequently as before. The waste is left on the medians for days unpacked. The stench from the waste is terrible. People who have shops around here are not comfortable with it. We appeal to the government to ensure it is packed regularly like before,” Ababa said.

On her part, Mr Bukola Sobowale held that the state government should be concerned about the health consequences of not addressing the waste challenge headlong. “We are at risk of cholera and beg the government to do something about it. We have to cover our noses every now and then to stay around this area. Waste is everywhere and we fear our children are at risk of ailments,” Sobowale said.

While it was the state government’s responsibility to ensure a clean environment, the waste contractor inherited from the past government, West Africa Energy was actually in the eye of the storm. The handwriting was on the wall when environmental health officers and heads of local administration across the state, at a stakeholders’ meeting held in June, blasted the WestAfricaENRG for inefficiency in the management of waste, hence the heaps of refuse and litter that had become commonplace on medians and highways across the state. The decision of the state government to sack WestAfricaENRG five months after was therefore not a surprise.

Before the sack, the waste contractor had said inefficient waste management was a behavioral issue where residents had the mindset that it was government’s responsibility to clear their refuse. Chief Operating Officer, West Africa Energy, Mrs Lolade Oresanwo stressed that it was imperative for citizens of the state to take responsibility for their waste by getting a waste bin and patronizing a waste collector. Inefficient waste collection was also being attributed to wear and tear of waste collection trucks as a result of rainfall, poor access roads to the dumpsites as well as the fact that the four dumpsites in Ibadan: Lapite, Awotan, Ajakanga and Abeeku had become inadequate.

While submitting her report to Governor Makinde, chairman, investigative panel on Waste and Refuse Management in Ibadan, Mrs Ololade Agboola had also identified the challenge the state faced with dumpsites and the existence of some subcontractors that had grievances with the former waste contractor. “We discovered that there were two sets of sub-contractors. Some were ready to work with the consultant appointed by the state government, some are aggrieved contractor who could not meet the deadline given when the consultant called for registration, so they formed themselves into a group and are making refuse collection impossible in some areas,” Agboola said.

In addressing the issue of dumpsite, Oyo State Commissioner for Environment and Water Resources, Mr Kehinde Ayoola said the state government will decommission the Lapite dumpsite and seek to open up a few sites for landfill where there will be decomposting and recycling. In furtherance of his investigation into the challenges of waste disposal in Ibadan, Governor  Makinde had also visited the Awotan dumpsite for the on-the-spot assessment. He also acknowledged the challenge of bad access roads to the dumpsites, assuring that the road from Apete to the Awotan dumpsite will be fixed.

Since Makinde’s Monday declaration of a state of emergency on solid waste management and his leading a clean-up exercise, there has been a more movement of waste collection trucks and less waste on medians as compared to previous weeks. Beyond being an eyesore, Makinde, while declaring a state of emergency had also noted that poor waste management threatened healthy living of residents of the state. Injecting an interesting angle to the problem, Makinde also said saboteurs were importing waste to rubbish the current government. While residents like Mr Niyi Adeagbo said the problem was compounded by the state government sacking WestAfricaEnrg without having a credible alternative, state Commissioner for Environment and Water Resources, Mr Kehinde Ayoola said the sacked contractor offered nothing as they relied on government’s trucks for their operations. On his part, Mr Akintola Ibraheem said the sack of WestAfricaEnrg was political, but noted that more important was the need to deal with the “mess”. Other residents of Ibadan like Mrs Fatimat Adeyemo and Mr Olawale Sadare tasked the state government to go beyond temporary refuse evacuation to proffering lasting solution to the problem. Sadare particularly urged the state government to come up with good policies on the environment and monitor their implementation.

The concern of residents for a lasting solution does resonate with Makinde who, in declaring a state of emergency, assured that a new waste management architecture will be unveiled within the next four weeks. This is as he instructed security agencies and the state Ministry of Environment and Water Resources to enforce the state’s Environment Sanitation and Waste Control Regulations. “We will mobilise all resources possible to do the clean-up. Yes, this is a short term thing. It is not for showmanship; it is a serious challenge that we have. If we don’t do it, few weeks down the line, we will see the impact in our hospitals. I hear there are saboteurs who neatly arrange the trash on the medians. Anyone caught importing waste to Oyo State will be dealt with according to our environmental laws. From our projection, within the next three to four weeks, we should have a permanent solution in place; a model that will be sustainable and that will also be full-proof for the saboteurs,” Makinde said.

Ogiyan, Olowolotu Ife, others are descendants of Olofin —Oba Adeniyi