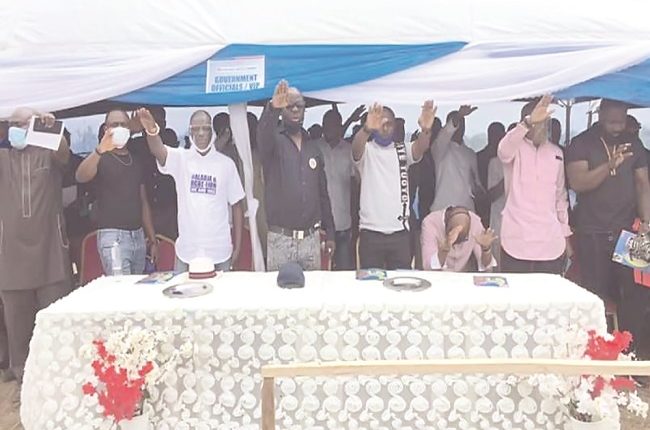 The Urhobo and Ijaw neighbours showed signs of reconciliation last weekend as natives from the communities jointly embarked on a peaceful concert at the disputed land border.

Dispute over the piece of land has, in over a decade, claimed several lives and property from both communities with successive governments in the state unable to abate the perpetual bloodbaths in spite of monies sunk into unimplemented blueprints from several peace committees instituted.

The peaceful concert, which was organized by youths from both communities under the aegis of Aladja/Ogbe-Ijoh Peace Vanguard, had ace Nollywood actor, Richard Mofe Damijo, Hush Babe and Harry Song in attendance.

The concert, which was tagged, ‘We are one’ began with a motorcade rally from NPA Waterside in Warri through Enerhen, Udu, Aladja and Ogbe-Ijoh communities before terminating at the disputed border land.

Convener of the Aladja and Ogbe-Ijoh Peace Concert, Reverend Enienghan Thompson Layefa, blamed some misguided youths for the perennial land crisis, urging the people of both communities to believe and sustain the peace they had achieved.

“Let preach peace. Let’s stand for peace. Let’s love one another. There is no gain in crisis. With crisis, development will be far from our land. We need roads. We need lights and others. We need to build houses to the two communities,” he pleaded.

Chairmen of Udu and Warri South-West localgovernment areas, Mr Kite Brown and Mr Taye Duke Tuoyo, who lauded the state government’s efforts towards seeing to the end of the rift, urged the people, especially the youths, women and elders of the two communities to sustain the peace so far attained.

A representative of the Ogbe-Ijoh Warri Traditional Council, Chief A. O. Jolomi, thanked the elders for embracing the peace talks with their Aladja brothers, just as a leader in Aladja community, Chief C.C. Williki, appreciated God for restoring peace to the two communities.

Omare urged the warring cultists to leave Aladja and Ogbe-Ijoh communities, saying “We don’t want to see you here. Do your cultism outside our land.”

Nollywood act and former Delta Commissioner for Culture and Tourism, Richard Damijo, who was flanked by Harry Song and Hush Babe, promised to groom young talents from both communities.

Earlier in a sermon, Reverend Emmanuel Aleyabor of the Church of God Mission in Ogbe-Ijoh, urged the people to embrace peace, without which he noted, meaningful developments would continue  to elude the two communities.

Lessons From Fani-Kayode’s ‘Stupid’
The Femi Fani-Kayode experience was needless and plainly avoidable. But something tells me it won’t be the last. There is the feeling today in power circles that because of the ascendancy of the Internet and its platforms of social engagements, the press as we knew it is now impotent and could be humiliated and called stupid without consequences. The truth of the media’s undying powers should be clear in what Femi just went through…Warring Delta communities  Warring Delta communities

Buhari Approves Transfer Of NIMC To Communications Ministry
President Muhammadu Buhari has approved the transfer of the National Identity Management Commission (NIMC) to the Federal Ministry of Communications and Digital Economy. A statement signed by the Minister‘s Spokesperson, Mrs Uwa Suleiman, on Monday in Abuja, said that the approval was based on Buhari’s consideration for the critical role of NIMC towards the realisation of the objectives of the National Digital Economy Policy and…Warring Delta communities

Businesses May Not Normalise Till August 2021—Report
BUSINESSES and brands, hoping to return to ‘winning ways’ soon, after the devastating effects of the COVID 19  pandemic, may need to wait a little bit longer, as a recently-released CEO Report, from Philips Consulting Limited PCL,  has predicted that it would take another 12 months, August 2021, for the nation’s business environment to fully activate and operate optimally…Warring Delta communities  Warring Delta communities

Success in Nollywood is not easy — Lilian Echelon Mbadiwe