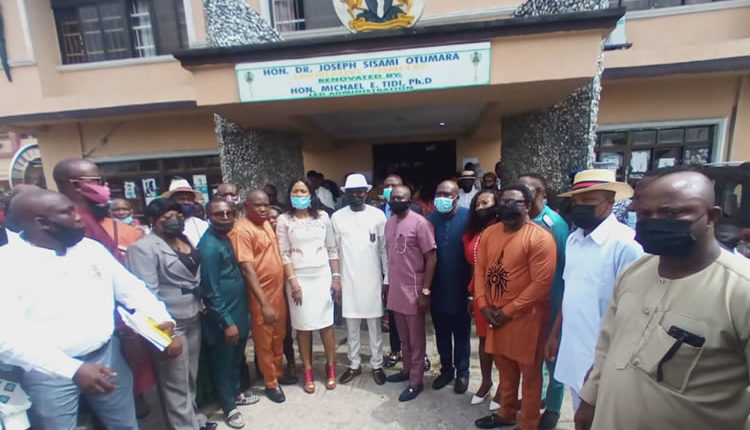 The councilors were sworn in by the Chief Magistrate, Warri, Edoja Sowho.

In his Inaugural speech during the ceremony, Tidi, enjoined the newly elected councilors to repose the confidence of the electorate by making laws that would impact positively on the lives of the people.

The council boss craved the cooperation of the 6th Assembly of the Legislative Arm for speedy consideration and passage of the Executive bills that will be sent to the house in no distant time, saying that they are partners in progress.

He noted that the task of bringing the dividends of democracy to the doorsteps of the people of the council area starts with the lawmakers and hence could not afford to fail.

While congratulating the councillors both ranking and new, Tidi joined the councilors in thanking the electorates for giving them the opportunity to serve, adding that “Our emergence at the polls shows the trust our people have reposed in us and trust goes with responsibility.”

“It behoves on the executive arm and the Legislative Arm to collaborate and work assiduously to provide the dividends of democracy for our people, hence we cannot afford excuses. I’m very cautious of the fact that we have three arms of government, the executive, the legislature and the judiciary and they are independent of each other,” Tidi said.

Tidi who summarized the well-thoughtout programmes of this administration in his 2nd term in office said they will focus on the environment, stressing that “Warri South LGA must stand out as the cleanest and neatest LGA in Delta State, We will ensure daily cleaning and clearing of our streets and major roads in Warri city and its environs.”

“Peace and security of our people is of utmost importance to me, we will strengthened our working relationship with the leadership of our communities, the security agencies and the council for effective information gathering and crime prevention.

“The educational sector, youth empowerment and agriculture, we will place in the front burner. This will help to discourage the rural-urban drift.

“We will improve on our IGR, by way of extending our tax net and encouraging small and medium scale businesses to thrive.

“We must restore sanity on our roads, all forms of lawlessness on our roads will be checked, we will work with the security agencies to enforce our traffic laws,” Tidi said.

The Warri South council boss also thanked party leaders, political leaders and constituents and the people of Warri South LGA for their warm support and show of love, promising that his team will continue to work for a better and a prosperous Warri South LGA.