•We've got approval to fix it ― Okowa 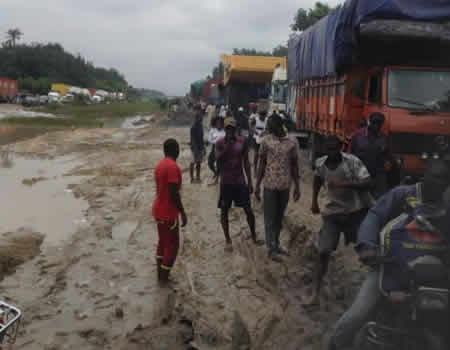 Commuters plying the dilapidated Warri – Benin dual carriage highway have lambasted the Delta State government for shying away from its primary responsibility to its citizenry in the area of provision of good and accessible roads.

They described as wasteful and nightmarish the manhour running into five hours motorists now spend from Warri by navigating the jungle to access Benin due to horribly bad portions of the critical road linking four oil-producing states.

Nigerian Tribune at the weekend embarked on a fact-finding mission on what motorists encounter when attempting to follow a different path to link Benin aside the Warri – Sapele axis of the highway that has been completely cut off.

It was discovered that from Warri, motorists, including articulated vehicles, now pass through similarly-deplorable Abraka – Eku road, then through Ovurie, Adagbrassa, Edjeba Okpe, to access  Amukpe roundabout.

This takes about three hours amid fears of kidnappers. Unfortunately, some spots along the detour are also already caving in, especially at the State School of Midwifery, Sapele’s spot.

From a closer observation, about a kilometre from Amukpe junction towards Oghara, some articulated trucks have blocked the carriage. So, vehicles heading towards Benin have to face vehicles coming from Benin.

At the boundary Ologbo community in Edo State, another very bad spot was cited. Vehicles coming from Sapele must face those coming from Benin on the left and then later right.

That axis of the road is deplorable and terribly appalling such that vehicles have to navigate back to the lane towards Benin, by crossing the muddy median where a vehicle with no auxiliary gear will get stuck.

The gangs of idle street urchins comprising men and teenagers who should be in school now station themselves at few metres distance away from one another, armed with sticks, clubs and nail-planks to extort motorists, especially trucks.

At Adagbrassa junction while linking Amukpe, some of the touts could be seen lowering a high tension cable across the road to hinder trailers from accessing Adagbrassa to Warri rout unless they part with money.

A Lagos-bound driver with G. Agofure Motors, who spoke to Nigerian Tribune, said when coming from Lagos, they now usually sleep at Sapele to continue the journey at the wee hours of the following day to Warri and Port Harcourt.

He attributed the reason to gridlock and, sometimes, outright blockade of the expressway from Sapele to Warri.

“We dey sleep for Sapele now when we dey come from Lagos because the road they block to Warri.

“Some of we passengers dey sleep for park for Warri to continue the journey to Port Harcourt the following morning.

“Delta State government no try at all. If you rent house and small place dey leak, you go dey look for your landlord wey dey abroad to come do am?

A commuter, from the Eastern part of Nigeria, told Nigerian Tribune that after being stuck for hours, he had to board a motorcycle at N3, 000 from Koko junction in Warri North down to Warri when gridlock took over the stretch from Sapele to Warri due to the deplorable road.

According to him, after getting to the bad spots of the dual carriage while heading to Warri from Sapele on motorcycle, the passenger and rider must disembark, push the bike to the other side of the bad portion to continue the journey.

However, as of Sunday, Governor Ifeanyi Okowa announced in Warri that the Federal Government had given approval to the state to intervene on the increasing dilapidation of some of its roads in the state.

He said the state government got the nod on Thursday, September 12, 2019, adding that contractors had immediately been mobilised to the roads to carry out rehabilitation, explaining that the measure was to improve intra-state movement.

He specifically mentioned that palliative work had started on the deplorable Benin-Sapele road and at the Asaba side of River Niger Bridge on the Asaba-Onitsha highway.

He added that the state government would also rehabilitate Agbor- Abraka-Eku road, which had also been in a deplorable state, saying: “I know that Deltans are unhappy with the deplorable state of federal roads across the state. We may not have the resources to do the road but we can do palliative work on them.