Why we want to recruit 10,000 youths for pipeline protection —Presidential Amnesty Office 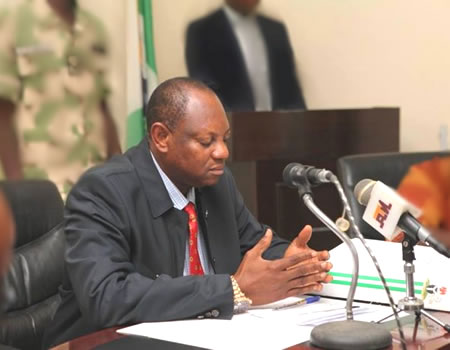 The Special Adviser to the President on Niger Delta and Coordinator of the Presidential Amnesty Programme, Brig Gen. Paul Boroh (Rtd), has justified the reason behind the Federal Government’s decision to recruit unemployed Niger Delta youths for pipeline protection.

Boroh, who spoke with Nigerian Tribune after receiving three beneficiaries of the programme who graduated with first class degree from  Belarus, a country in Eastern Europe, in Abuja, said the decision was a fall out of the interaction between the Acting President, Professor Yemi Osinbajo and the Pan Niger-Delta Forum (PANDEF).

Besides, he said the Federal Government resolved to employ the jobless youths to douse tension in the region and ensure that the oil pipelines are adequately protected.

He pointed out that there was no amount of money that is too much to ensure and maintain peace anywhere in the country, adding that all the parties involved were happy at the end of the meeting.

Boroh said “The PANDEF meeting with the Federal Government went very well and it was also revealing as to what the government is doing towards ensuring peace, stability and development in the region. At the end of the meeting every representative in the meeting was happy and a win-win situation was established.

“It was revealed in the meeting too the enormous amount of time and resources that the Federal Government expends in the Niger Delta region through the interventionists institutions,  Ministry of Niger Delta Affairs, Ministry of Environment, Ministry of Petroleum Resources, NDDC, Amnesty Programme and the Local Content Development Board.

“The region, itself is peculiar for development it is not as easy to develop that region like other regions, the terrain,vegetation and climate actually requires a lot of time and efforts to make a difference.”

The programme, according to him is expected to kick start in the next three weeks.

He said the presidency has mandated the amnesty office to key it under “Securing Petroleum Pipelines and Assets in Host Communities” whereby 100 persons would be assigned to protect pipelines stretching at least 5,000 kilometers.

He explained that the programme has so far gulped N48 billion including other strategies adopted to maintain peace in the region.

The Special Adviser also assured that the proposed Petroleum Industry Bill (PIB) would end frequent agitation and hostility in the Niger Delta region, if finally pass into law.

According to him, the Federal Government had done well towards ensuring lasting peace and development in the region.

He said this year alone, about 177 and 140 beneficiaries have graduated from universities across United State of America, and the United Kingdom respectively.

“This year alone, I am proud on behalf of Federal Government to say that 177 beneficiaries graduated from universities across the United States of America and in UK. Nothing less that 140 have benefited from the Amnesty Programme, if you calculate the total sum, it is huge, it is nothing less than N48 billion for human capacity development.

“The PIB would streamline Federal Government initiative towards development of the region. Once it is passed and there is appropriation, there would be massive developmental impactation in that region,” he said.

Smart cities: There must be public, private sectors synergy—Danbatta