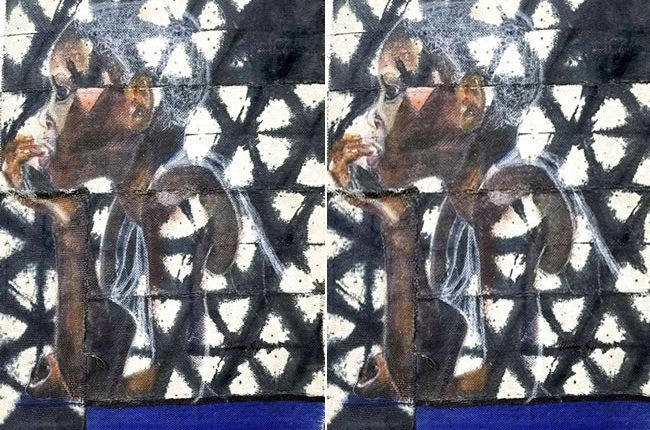 Artist and fashion designer Wanger Ayu’s works project cultural values in traditional and contemporary art. She enriches her art using mediums that combine the A’nger fabric of the Tiv people with painting, printmaking and collage.

“I had never connected to who I was as a person before now,” the artist explained shortly after her debut exhibition, a two-person show entitled ‘Weaving Identity’ held at DICA Art, Lagos, in December. “My father is Tiv, from Benue; mother is Esan, Edo State, and I was born in Jos, Plateau State. I later moved to Abuja,” she added of her journey and self-discovery process.

That journey, however, was not limited to Nigeria alone. She had a part of her education in England and lived in Dubai. When she returned to Nigeria, she did her National Youth Service in Enugu State, another different culture from her native Tiv. After such varying influences, Ayu is now pushing her work into the mainstream art appreciation space, as evident from the recent show.

The artist uses native fabric pieces and cultural symbols to produce contemporary content. Given their novelty, it was not a surprise that they were all acquired at the show. “My works at the Weaving Identity exhibition sold out,” she gushed.

Apart from using the popular Tiv black and white stripes as an essential part of her art, Ayu also proves her versatility as an artist of great potentials in figurative works. Her work, she disclosed, are emerging in phases, starting from the recent debut exhibition. “The work is phased with “multiplicity” being the first part. I am focused on disruptions: breaks, ruptures, and disruptive events and their effects on the individual, the family, and the society,” she explained in her artist statement.

Pieces like ‘Kura’ (keep watch or guard); ‘Kumakavwen’ (It is time to understand); ‘Bundesaan’ (No longer lost); and ‘Avadoo’ (It shall be good) were among Ayu’s works that celebrate the beauty of combined native and contemporary expressions.

Curator, Naomi Edobor, noted that in the ‘Multiplicity’ body of work, Ayu uses the A’nger cloth; a piece of black and white striped plain-woven cloth that is produced on the narrow band loom by the Tiv people of the Benue valley as a background for weaving a tale. She said Ayu’s entire work seeks to engage the public by exploring the tensions between past and present.

“The A’nger cloth is most popular because it is an average cloth for both men and women – the two complementary forces that make up all aspects and phenomena of life- The colours of the A’nger cloth depict unity, how opposite forces may be complementary, interconnected, and interdependent and how they may give rise to each other as they interrelate to one another.”

The curator explained that the multicultural background of Ayu reiterates the exception that the average person in the 21st century is a coalescence of multiple cultures and influences.

“We are all different and yet at the same, with threads connecting us more closely than we realise, our cultural identity is an essential part of the conflict, and conflict resolution, shaping our perceptions and ideas of self,” Edobor said. “They are always changing and always being renegotiated, and we are constantly in this shift, forcing us to have debates with ourselves about who we are and who we want to be, always becoming.”

Before becoming an artist and fashion designer, the 36-year-old Ayu studied law at the University of Exeter, UK. She later earned a diploma from the French Fashion University (ESMOD), Dubai. She launched the fashion label, ‘Wanger Ayu’, which earned her the patronage of acclaimed author, Chimamanda Ngozi Adichie and several nominations including the fashion category of the Future Awards twice.

She transited to studio practice in 2017 after a surgery left her significantly immobile at home. Art became her therapy and escape, providing freedom. Since then, she has been mentored by some of Nigeria’s old and contemporary masters including Dr Bruce Onobrakpeya and Mr Sam Ovraiti through the Harmattan Workshop Series.