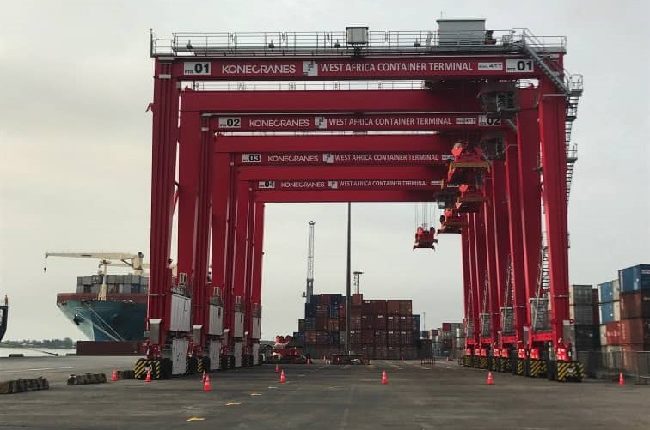 The West Africa Container Terminal (WACT), Onne has acquired 15 new Kone Rubber Tyred Gantry Cranes (RTGs) to enhance service delivery at its terminal in Onne Port, Rivers State. The first batch of six RTGs has arrived at WACT, Onne.
The Commercial Manager of WACT, Mr Noah Sheriff, who confirmed this in a statement issued by the company, on Monday, said the concessionaire had commenced training operators of the highly technical cranes, which are the first in Nigeria’s eastern ports.

“We expect to deploy this first set of RTGs into operations in May 2021. Awareness campaign with the trucking community is also ongoing,” he said.

Sheriff said the deployment of the six new cranes “is the start of WACT’s transformation from the use of Reach Stackers to RTGs in the terminal, which will immediately increase our current import yard capacity.”

“We are expecting a total of 15 RTGs. With the delivery of the first set of six, we expect nine more, which will be delivered later this year,” he said.

He said the acquisition of the new cranes and terminal trucks is part of an ongoing USD100 million investment, which is “aimed at significantly increasing the terminal capacity for the benefit of our landside customers in the Eastern part of the country.”

He said, “We envisage significant volume growth; hence we embarked on an ambitious terminal upgrade, which includes both yard expansion and equipment upgrade.

“We are also delighted to inform the port community that our contractors have mobilized on-site for the commencement of civil works in continuation of the upgrade. The civil works are scheduled to be completed this December,” he said.

The Managing Director of WACT, Aamir Mirza, said WACT has become one of the best-equipped container terminals in West Africa and has strategic plans for consistent improvement in every area of its operations.

“With our massive investment, WACT has established itself as the largest and most efficient container terminal in East Nigeria, creating thousands of direct and indirect job opportunities. We now receive large and gearless vessels that hitherto were only able to call at Lagos ports,” he said.

WACT, which started commercial operation in 2006, is the first Greenfield container terminal in Nigeria to be built under a Public-Private Partnership (PPP) model. The terminal is located within the Oil and Gas Free Zone in Onne Port, Rivers State. Over the years, it has grown to become the most efficient gateway to markets outside the Lagos area.