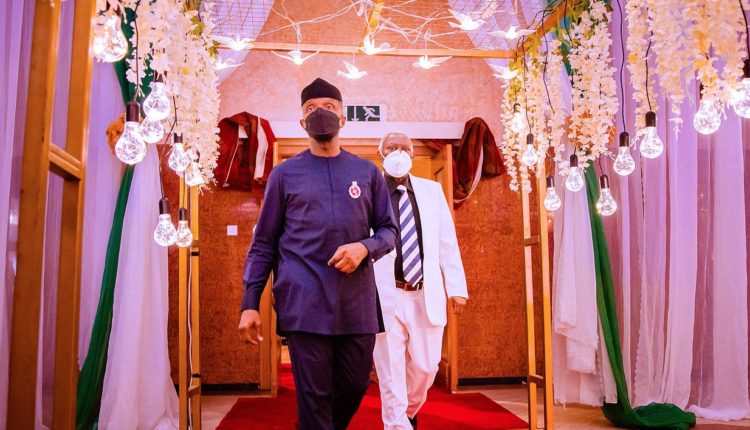 The General Superintendent of the Deeper Christian Life Ministry, Pastor W.F. Kumuyi, who delivered the Christmas message, preached on “the divine revelation, divine realization and the glory of the destined restoration that Christ brought to the world.”

Apart from the rendition of Christmas Carols, there were also the reading of selected Scriptures by the Delta State Governor, Dr. Ifeanyi Okowa; Head of Civil Service of the Federation, Folashade Yemi-Esan; the United States Ambassador to Nigeria, Mary Beth Leonard, and His Royal Majesty, the Tor Tiv, Prof. James Ayatse, from Gboko, Benue State.

The yearly Praise Concert did not hold last year due to the COVID-19 pandemic and the attendant restriction protocols.

In his sermon, Pastor W.F. Kumuyi, spoke about the story of the desired expectation, song of divine visitation, symphony of delightful jubilation, and sanctity of dutiful proclamation.

Referencing the Scriptures, especially the Gospels, the guest preacher spoke on the fact that the angels came to announce joy and peace (which is personal and perpetual) on earth. He said, “the message is the angel’s announcement from on high to meet us, this nation and to every nation of the world at this time until Christ comes again.”

He went on to say that “there is the irreversible decree that the Saviour would come, as we believe in Him, the decree is fulfilled in our lives” as well as “the irresistible dominion that God has remembered us… by giving us a saviour.”

The State House Chaplain, Pastor Joseph Seyi Malomo, who led a brief special prayer for Nigeria and its leaders, quoted from the Psalms that “it is a good thing to give thanks unto the Lord, to proclaim His loving kindness in the morning, and His faithfulness every night.”

“We thank God for bringing us to the end of this year; also, for the fact that last year, we could not gather physically, it means therefore that now we are overcoming the war against COVID-19. Eventually COVID-19 will be history by the grace of God,” he prayed.

Aside from the Vice President, other dignitaries who also graced the Carol service included his wife, Mrs. Dolapo Osinbajo; Secretary to the Government of the Federation, Boss Mustapha; Deputy Governor of Nasarawa State, Dr Emmanuel Akabe; Federal Ministers; members of the National Assembly; heads of Ministries, Departments and Agencies; members of the Diplomatic Corp; His Royal Majesty, the Olu of Warri, Ogiame Atuwatse III, and his wife, Olori Atuwase III, His Royal Highness, King Alfred Diete-Spiff, Amanyanabo of Twon-Brass, Bayelsa State amongst others.