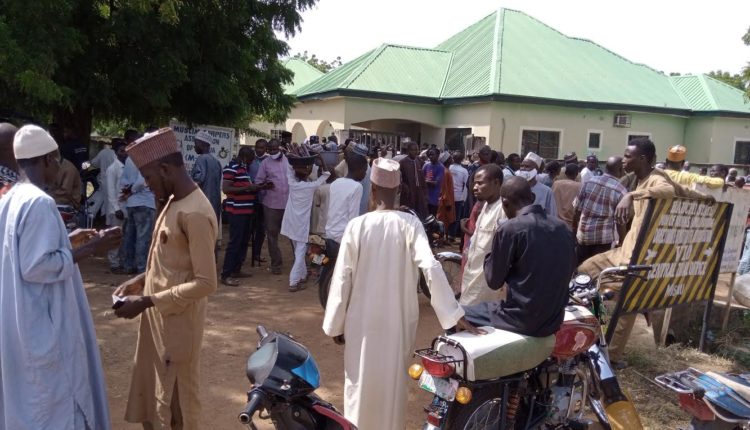 Voters apathy and late distribution of election materials are militating against the smooth conduct of the local government councils elections in Bauchi State caused majorly by a long absence of such election in the past 13 years.

Our Correspondent who is monitoring the conduct of the exercise observed that electorate refused to turn out at most of the polling units visited just as election materials did not arrive as of 10am when this report was filed.

At the BASIEC offices at Darazo and Misau LGAs, Electoral officers were busy distributing the election materials to all the wards  from where they were to be distributed to the polling units and centers with assurance that the exercise will be hitch-free.

In Darazo LGA, The All Progressives Congress (APC) alleged that there were plans by the ruling People’s’ Democratic Party  (PDP) to rig  the council in the election in the area.

The allegation was made by the APC Chairman in Darazo Local Government Area, Adamu Mohammed Maichibi, in an interview with journalists  monitoring the local election in Darazo on Saturday.

He alleged that, “Now you can see it is past 9: am and up till now they have not finished distributing electoral materials, But that is not even our major concern if they would ensure that all the electoral materials get to their destination. We don’t even believe they will reach everywhere because of the following reasons”.

“First of all, I am just from the police station because there were electoral materials from  Wawu and Papa wards which had been hijacked in Sade town  by political thugs of the PDP who refused to  allow the materials to get to their destination. What is even more surprising is the fact that among the vehicles were security agents”, he added.

The APC Chairman added that, “We reported the incidence to the DPO that ,these materials were hijacked` for at least 30 minutes in a town that is 20 kilometric and another one 70 kilometres from  Sade and we don’t know what the reason is . We have reported to the officer in charge of the distribution of materials at the local government level but up till now  nothing has been done”.

He, however, declared that, “Even if they will give us a reason why that has happened we will not accept it because we know from here that once they have materials they are supposed to stop at their destination so why will they stop at Sade town when the materials are not meant for Sade. This means that they are trying to rig the election because they want to keep the electoral materials in Sade because they don’t have the majority there.”

Adamu Maichibi added that, “This is our stronghold and they want to use that action and if the officers there agree they will just thumb print the papers there. Initially we thought there was going to be justice, that the election will be free and fair but with this action which has shaken us we feel justice will not be one and if there is justice, we feel that even a councilor PDP will not get because APC will win the whole of Darazo local government because what has given is that belief is the fact that we campaigned thoroughly to all nooks and cranny of the local government while PDP on their didn’t even belief that election will still hold even up to this morning.”

But in a swift Response, a chieftain of the PDP in Darazo, Nasiru Darazo said that the PDP from the state level has made proper arrangements for peaceful and transparent elections.

He said that Governor Bala Mohammed “is a democrat, and I want to assure you that anyone one who wins the election genuinely will be declared winner irrespective of his party” and debunked insinuations that the PDP has perfected plans to rig the polls.

In Misau, the APC also alleged plans to manipulate the elections by the PDP declaring that the party will do everything humanly possible to ensure that the exercise was conducted freely and fairly no matter the threat by the PDP.

An APC leader in the LGA, Sallau Abdu alleged that they got information that the ballot papers had been thump printed but later discovered that it was mere rumors, “we therefore agreed that all the materials to be used should be marked by the Electoral officers and it has been done, now we are ready for the election.”