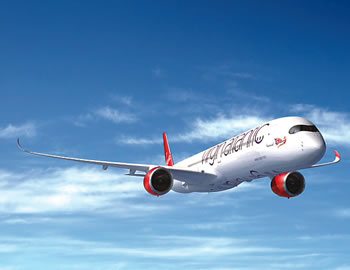 After almost five months of suspension of foreign flights into Nigeria following the outbreak and spread of coronavirus pandemic into Nigeria, the British flag carrier, Virgin Atlantic, has announced that it will recommence operations into Nigeria from August 24th, 2020.

The airline in its resolve to return big to the Nigerian route said it will be operating its new A350-1000 aircraft on the Lagos/ London Heathrow with a promise to provide connections to a range of US destinations.

The airline declared: “We are also delighted to announce that when we return to Lagos we will be doing so on our new A350-1000 aircraft which is packed with innovation, thoughtful features, and unmistakable Virgin Atlantic flair. From our new enhanced social space to extra storage, and our latest entertainment system, there’s so much to look forward to.”

The British carrier has also announced plans to restart first passenger flights from London Heathrow to New York JFK, Los Angeles and Hong Kong from 20th and July 21st, 2020 even as it said that the restarting of routes is however dependent on travel restrictions lifting around the world.

ALSO READ: 44.5 per cent of Nigerians aren’t confident their children will be protected from coronavirus when schools reopen ― US poll

The airline has also hinted of the additional measures put in place at the airport and onboard to ensure health and safety of its customers.

Following the airline’s announcement that services from London Heathrow to Hong Kong, New York JFK and Los Angeles are also expected to resume from 20th and 21st July 2020, it has unveiled more detailed plans that will see passengers flying restart to many destinations across the airline’s network.

Commenting on the development, Juha Jarvinen, Chief Commercial Officer, Virgin Atlantic stated: “As countries around the world begin to relax travel restrictions, we look forward to welcoming our customers back onboard and flying them safely to many destinations across our network. From 20th July we will resume services to New York, Los Angeles and Hong Kong then from 1st August onwards, we will resume passenger flying to 17 additional destinations around the world including Lagos, Tel Aviv, Atlanta, Mumbai and Las Vegas.

“However, we are monitoring external conditions extremely closely, in particular the travel restrictions many countries have in place including the 14-day quarantine policy for travellers entering the UK. We know that as the COVID-19 crisis subsides, air travel will be a vital enabler of the UK’s economic recovery. Therefore, we are calling for UK Government to continually review its quarantine measures and instead look at a multi-layered approach of carefully targeted public health and screening measures, including air bridges, which will support a successful and safe restart of international air travel for passengers and businesses.”