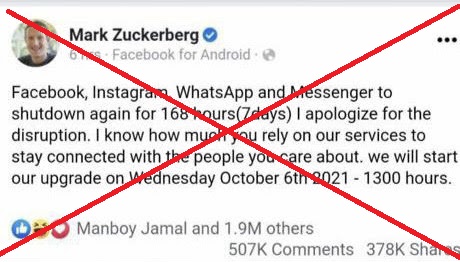 Users who rely on social media platforms for everything from connecting with friends to running their businesses were restricted. The last time the three Facebook-owned networks went down was on March 19, 2021.

On Monday evening, Facebook in a post on Twitter confirmed its apps were coming back online and apologised to users for a blackout that affected millions of people across the world.

However, a Facebook post screenshot which is now widely shared on WhatsApp, purportedly from the verified handle of Mark Zuckerberg, claims Facebook, Instagram, WhatsApp and Messenger will be inaccessible again but this time for seven days starting from October 6, 2021.

The Facebook post reads: “Facebook, Instagram, WhatsApp and Messenger to shut down again for 168 hours(7days). I apologize for the disruption. I know how much you rely on our services to stay connected with the people you care about. We will start our upgrade on Wednesday October 6th 2021 – 1300 hours.”

Dubawa started by checking Mark Zuckerberg’s Facebook page to check all the recent posts made by him.

This search shows that the circulated post was manipulated from one of his recent posts.

The original post from Mark Zuckerberg was made on Tuesday, October 5 to apologise for the disruption. It reads: “Facebook, Instagram, WhatsApp and Messenger are coming back online now. Sorry for the disruption today — I know how much you rely on our services to stay connected with the people you care about.”

Dubawa also made use of Forensically, a tool for digital image forensics, which confirmed that the picture had been created by some photo manipulation tricks.

Image 1 is a result of the image using Forensically’s error level analysis on the original post from Mark Zuckerberg which shows a glittering ray of colours emerging from the text.

The same error analysis is conducted on image 2 which is the fake post purportedly from Zuckerberg. Aside from three glittering parts of the image,  the main text is entirely black and white unlike the original post (Image 1).

Findings have shown that Facebook post’s screenshot, purportedly from the verified handle of Mark Zuckerberg, is false. The original post from Zuckerberg was manipulated to mislead the public.