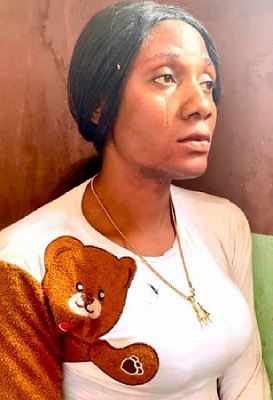 The Kogi State vigilante group in charge of Adavi local government has arrested a young man who disguised as a woman in the Zariagi community.

He was apprehended by officers of the vigilante group when they noticed he was making suspicious moves.

In a statement issued by the media aide to the local government chairman, Jamiu Habeeb, the council boss was at the scene to confirm the incident.

According to the statement, the council chairman, Hon. Joseph Omuya Salami directed the vigilante group to hand over the suspect to Nigeria Army, whose officers were also at the scene, for further questioning.

The suspect confirmed his name as Musa, an indigene of Kogi State from Ofu local government in Kogi east.

He claimed to be a dancer but he is yet to disclose his motive in that area because nobody could identify him as part of the community or have met him before.

Recall that the Zariagi community has been a point of reference where kidnappers do terrorise travelers before the government decided to deploy more security agencies and surveillance to the location to prevent such incidents to protect lives and property.

The statement confirmed that the Nigerian Army has taken charge of the situation and after investigations Musa will be tried if found guilty of any criminal act.

In spite of the huge investment in the water sector by the government and international organisations, water scarcity has grown to become a perennial nightmare for residents of Abeokuta, the Ogun State capital. This report x-rays the lives and experiences of residents in getting clean, potable and affordable water amidst the surge of COVID-19 cases in the state…  Vigilantes arrest suspected criminal disguising as woman in Kogi

Your passion for a united Nigeria is commendable, APC govs tell Zulum