(VIDEO): Moment Melania Trump refused to stand beside husband for photograph during arrival at Florida 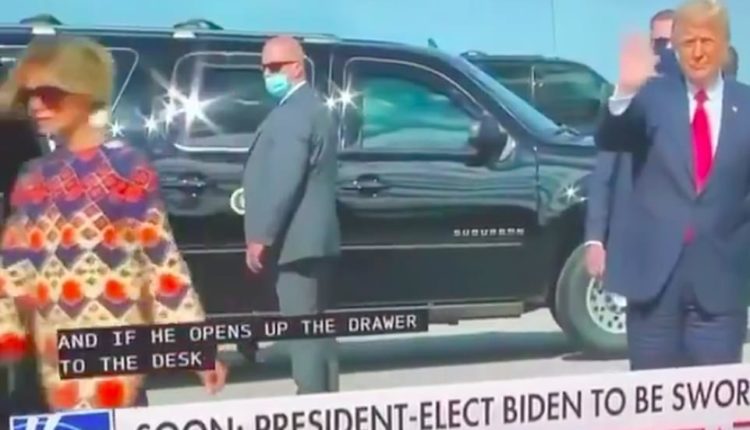 Former US First Lady, Melania Trump, made clear that she is ready for a break from the spotlight when she refused to stop and pose for waiting photographers upon her arrival in Florida – instead striding away from them without so much as a wave while her husband posed for pictures as recorded by Daily Mail of UK.

Video of the moment a stony-faced Melania, 50, purposefully walked straight past the media at Palm Beach Airport while leaving her husband in her wake has left many with the impression that she is done playing nice for the cameras.

The recording has gone Twitter, where users are pointing out that the mother-of-one appears to ‘give no f***s’ anymore, with some even speculating that she is moments away from filing for divorce.

The Trumps left Washington DC on Air Force One early on Wednesday and landed hours later in Florida to stay at Mar-a-Lago.

On board, Melania staged an outfit change, swapping the somber black look she departed in for a colorful $3,700 Gucci dress and kicking off her $795 Christian Louboutin heels for $625 ballerina flats by Roger Vivier.

Her outfit seemed to speak volumes about her desire to throw off the stress of life in the White House – with many noting that she appeared ready for a vacation.

But though changing into a new designer outfit indicated that she knew she’d be photographed upon landing, Melania didn’t seem to have any time or patience for the photographers.

Video footage shows her walking alongside her husband as Trump stops, turns toward the camera, smiles, and waves.

Melania, though, continued walking at the same pace, sparing a frowning glance at the crowd and cameras but otherwise not acknowledging their presence.