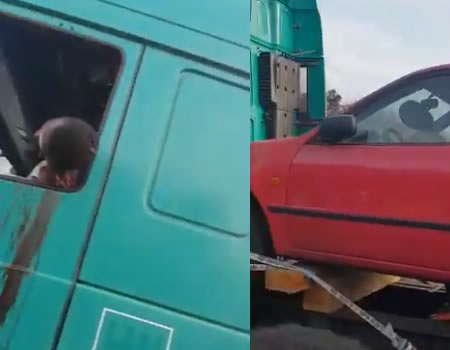 A haulage driver has been allegedly shot dead by police officers attached to Uso in Owo Local Government Area of Ondo State.

The incident which happened on Monday while moving vehicles to Abuja from the state, according to video footage retrieved by Tribune Online on the official handle of TVC news on Twitter, motorists were seen discussing the attack by the policemen in a pathetic voice, lamenting the way the driver was shot dead.

It was, however, gathered that the driver, who was moving vehicles from Ondo to Abuja, got into a heated argument with policemen attached to Uso where he was said to have been shot and died instantly.

The video further revealed the truck in which the haulage driver was driving with his blood appearing on the roadside.

TVC news' Ayodeji Moradeyo, gathered that the driver was moving some vehicles to Abj from Ondo, got into a heated argument with policemen attached to Uso checkpoint, Owo LGA, he was shot & died instantly pic.twitter.com/FoOCSDPL6t