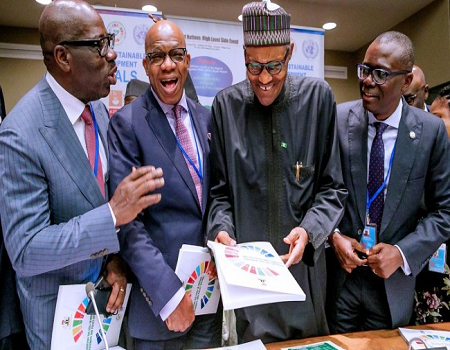 The League of Veteran Journalists, Oyo State chapter has called on President Muhammadu Buhari, the 36 state governors, members of the National Assembly and other political leaders in the country to take the government and governance in the country back to the people in order to allow for true development and progress.

This appeal was contained in a statement to mark the 59th Independence anniversary of Nigeria issued by the veteran journalists in the state signed by its Chairman and Secretary, Banji Ogundele and Oluwole Akinloye, respectively.

According to the statement, the veteran journalists wondered how the turn of  events had only made the political leaders the only beneficiary of dividends of democracy in Nigeria now.

The statement which decried the situation posited that ” contrary to what obtains in normal democracies all over the world, government and governance in Nigeria now are about the welfare and well-being of the political class.

“The example is the recent billions of Naira the Senate earmarked for vehicles of the Senators when millions of Nigerians could not afford the very basic needs of life. It is only in Nigeria that a senator earns more than the president” and challenged the president and senators to tell Nigerians where such an arrangement exist again.

Questioning the methodology that threw up the controversial sharing formula, the Veterans stated that “It is the responsibility of the Revenue Mobilization, Allocation and Fiscal Commission (RMAFC) that fixes salaries and allowances of political and public office holders in the country, how did we arrive at a situation where our president, the highest political office holder in the country, earns less than a senator?”

The League then challenged the ruling party, the All Progressives Congress (APC) at the federal level “to re-configure politics in such a way that infrastructural development will take the center stage in the politics of the country.”

The statement stated further “It is by so doing that the commonwealth of the country will be deployed to the power sector, education, health and roads construction, and maintenance which will make government and governance reach the generality of the people.

The League urged President Buhari to use the opportunity of the 59th independence anniversary to “right the political wrongs since 1999 and conduct government and governance in such a way to make democracy as the government of the people by the people and for the people.”

The Senior Journalists called on “the Federal government to release with immediate effect all persons detained in the spirit of the orders of courts of competent jurisdiction.”