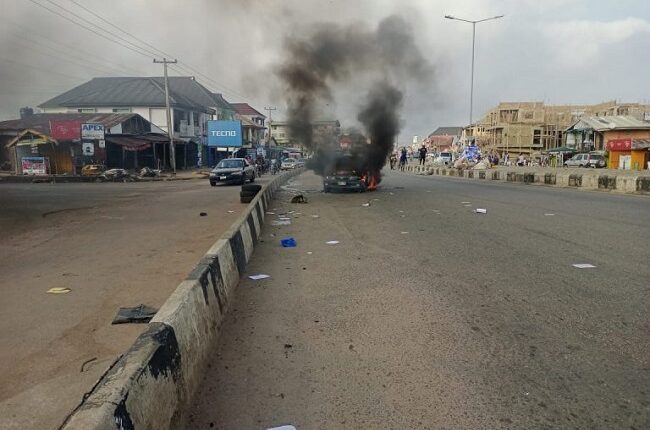 Factional members of the National Union Of Road Transport Workers (NURTW) in Osun State who attempted to hijack the control of motor parks in the state were resisted on Monday.

As earlier as 7 am on Monday, members of the faction stormed Old Garage Motor Park and Aregbesola Motor Parks in Osogbo but their moves were vehemently resisted by the supporters of those presently controlling the parks.

Members of the two factions reportedly used guns, broken bottles, knives, arrows and other forms of dangerous weapons in the fracas that led to the arson of a vehicle that belongs to one of them and vandalisation of the union offices.

Many people sustained deep matchet cuts on their bodies while some key members were also inflicted with other sharp objects.

Other motor parks like Oke-Baale, Ilesa Garage and Old Coca-Cola Area in the state capital were also attacked by the hijackers as reports indicated that the warring factions used charms on one another after bullets failed to penetrate into the bodies of some members.

The State Secretary of the union, Osundiya Akinsola, condemned the spate of violence that had rocked the union and called for peace.

In a statement, the governor’s aide warned against violence among transport workers’ unions in the state and directed security agencies to maintain status quo across the motor parks.

According to the statement, “All union leaders and their supporters are hereby directed to remain calm and bring any grievances to the state government for resolution. Security agencies are consequently directed to maintain law and order.”

Man shares amazing transformation of baby he rescued from the roadside