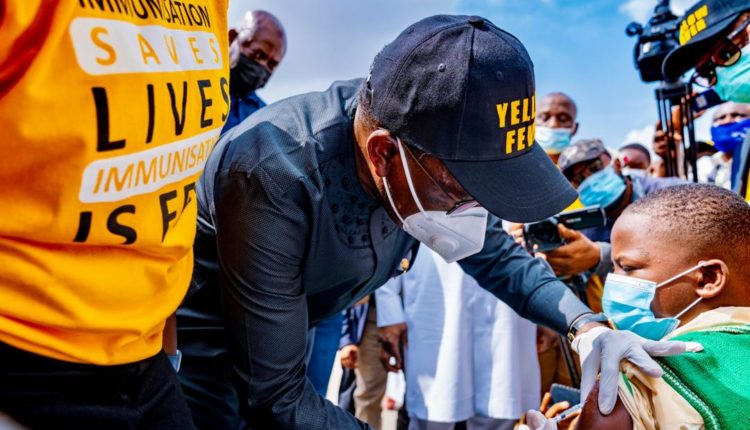 Okowa made this known on Thursday at the flag-off of preventive yellow fever mass vaccination campaign in Delta at the Events Centre, Asaba.

He said that the objective of the vaccination was to increase population immunity (herd immunity) to yellow fever thereby reducing the risk of transmission of the disease in communities.

He stated that poor community and environmental hygiene) practices were risk factors for the yellow fever disease.

According to him, the fight against it and other vaccine-preventable diseases requires enormous collective efforts of individuals, households, health workers and various Community-Based Organizations to ensure its prevention, control and surveillance.

“This campaign is a strategy aimed at sensitizing and vaccinating individuals aged nine months to 44 years with the Yellow Fever vaccine thus conferring lifelong immunity on the recipients.

“Vector control and environmental surveillance for the Aedes mosquito constitute critical pillars for sustainable prevention and control of the disease, in addition to routine immunization.

“So, I want to use this opportunity to encourage all our people to be vaccinated because it increases immunised population.

“Elimination of breeding sites such as uncovered water jars, old tins, bottles, among others, in addition to clearing surrounding bushes and avoiding mosquito bites through the use of nets and appropriate insect repellants, will enable us to contain the breeding of mosquitoes in our environment,” he said.

He admonished Deltans to take responsibility for their personal and communal-health while supporting government initiatives, interventions and programmes to achieve optimal health in line with his administration’s determination to achieve Universal Health Coverage through the stronger Delta agenda.

Okowa appealed to traditional rulers and political leaders across board to ensure that the people were mobilised to limit outbreak in the future.

“With regard to the Yellow Fever Campaign, I implore eligible Deltans, aged nine months to 44 years, to come out massively and get vaccinated against the deadly Yellow Fever disease irrespective of previous vaccination status.

“Health workers will be setting up vaccination posts in various public places in the communities to ensure adequate coverage.

“I count on the support of our royal fathers, traditional leaders, religious and opinion leaders in the engagement and mobilization of eligible groups to embrace this vaccination.

“It is instructive to note that this type of mass vaccination campaign for Yellow Fever prevention occurs only rarely as it confers lifelong immunity; hence we should endeavour to utilize the opportunity maximally to protect ourselves against the disease.

“Let me use this opportunity to commend health workers who have shown much empathy and commitment to their duties as in the containment of the Yellow Fever outbreak in Ika North East LGA in addition to the Covid-19 pandemic in the state.

“The same sense of duty and commitment is expected of you in this preventive Yellow Fever vaccination and in your other official duties across the state,” he said.

The governor commended local government chairmen for their various efforts at strengthening Primary Health Care system, including disease surveillance and response in their respective domains.

“I am truly expectant of their supportive roles in this Yellow Fever vaccination, including chairing of the daily evening review meetings to provide quick resolution of challenges that may arise during the implementation period,” he stated.

Ononye disclosed that the threat of yellow fever loomed larger than ever before, especially for thousands of children across the state and the country, and pointed out that the ease and speed of population movement, rapid urbanisation and resurgence of mosquitoes due to global warming had significantly increased the risk of urban outbreaks at an alarming rate.

While saying that yellow fever was a public health issue that could be controlled through preventive mass vaccination land routine immunisation, the commissioner stated that immunisation was part of efforts to eliminate the epidemic globally by 2026.

He added that the campaign was also a strategy to end the devastating disease by ensuring that most vulnerable communities had access to the vaccine.

He lauded Governor Okowa for facilitating the prompt response to the outbreak of the disease in Ika North East Local Government Area of the state by providing the needed resources and enabling environment.