• As protest rocks Ibadan over his arrest 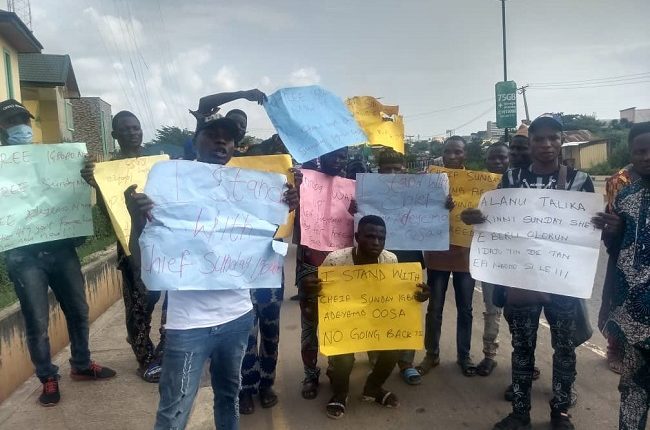 Youths, on Wednesday, stormed major streets and neighbourhoods in Ibadan, the Oyo State capital in a peaceful protest, demanding the release of the Yoruba nation agitator, Chief Sunday Adeyemo, fondly called Sunday Igboho, who was arrested in Cotonou, the Republic of Benin on Monday night.

The protesters, who took off from the frontage of Ighobo’s house, Soka, Ibadan, that was raided in the early hours of July 1, 2021, by the Department of State Security (DSS), over allegation of stockpiling arms and ammunition to destabilise Nigeria also called on traditional rulers in Yorubaland to explore their influence in securing his release.

The demonstrators marched through Soka, Sanyo, Felele, and converged on the Music House, housing the Fresh FM of the popular gospel music artiste, Yinka Ayefele, on Lagos bypass of Challenge, before they returned to Igboho’s residence after the protest.

Few of the protesters, who spoke to Tribune Online charged Yoruba monarchs not to abandon Igboho in his present travail.

They emphasised that traditional rulers in the South-West must rise up in Igboho’s defence and ensure his release from the detention of the Benin Republic security agency, bearing in mind that he (Igboho) was fighting for the cause and interest of the Yoruba race.

One of the protesting youths, David Ajulo stated: I am appealing to Yoruba monarchs. They should rise up in defence of Igboho. It should be known that many people in Yorubaland have suffered a lot at the hands of criminal herdsmen. They have raped, killed, kidnapped, took ransom and destroyed farmlands. So, many people are grieving in Yorubaland. Nobody came to their rescue, even the Federal Government and security agencies did not come to assist the Yoruba being terrorised by criminal herdsmen.”

“If you have the record, you can challenge me the number of criminal herdsmen that have been arrested, prosecuted, and jailed for committing those crimes mentioned. Based on the fact that the Federal Government is not tackling the menace, the criminal herdsmen still live in Yorubaland and they continued to commit the atrocities.”

Another protester, identified as Azeez Sulaiman, said the Federal Government should recall how the war that led to the end of the First Republic, started in Ibadan between 1960 and 1964, stressing that “we are not praying for civil war like Biafra. But when a goat is pushed to the wall, it will fight back.

“At the same time, the Federal Government should release those arrested in Igboho’s house on July 1, during a bloody raid of his house in Ibadan. We are also demanding the release of the Yoruba nation agitators that were arrested during a peaceful rally in Ojota, Lagos, on Saturday, July 3, this year. We are aware that the court has granted them bail, but the bail conditions were too stringent. They have not been able to meet the baik conditions.”

Similarly, one of the demonstrators, who pleaded anonymity posited that “the Federal Government and enemies of Yoruba nations wanted to provoke the boys of Igboho to fight and probably shed blood so that they could press murder charge against Igboho. No, it is not going to happen, the way they thought it would happen.”

Atakoro Omo Yerepe in his submission called on Alaafin of Oyo, Oba Lamidi Olayiwola Adeyemi, the Ooni of Ife, Oba Enitan Adeyeye Ogunwusi; and other prominent Yoruba monarchs, including Aare Ona Kakanfo of Yorubaland, Chief Gani Adams, to protect Igboho from being humiliated by the Federal Government.

It was also gathered that some Yoruba people residing in Cotonou, Republic of Benin, staged a peaceful protest in the nation’s court, where it was believed that Igboho would be taken to on Wednesday for hearing of the case on whether he should be extradited to Nigeria or he should be granted asylum.

It will be recalled that Igboho was arrested by the International Police (Interpol) at Cotonou Airport on Monday night, with his wife while attempting to board a plane to Germany.

The DSS in collaboration with other security agencies on July 1, 2021, invaded Igboho’s residence in Soka, Ibadan where they killed two of his aides and arrested 13 others, who were taken to Abuja.

They also went away with the corpses of the two aides of Igboho, who were shot dead during the midnight raid.