Use of aphrodisiacs can foster unity in marriages ― Nollywood actors 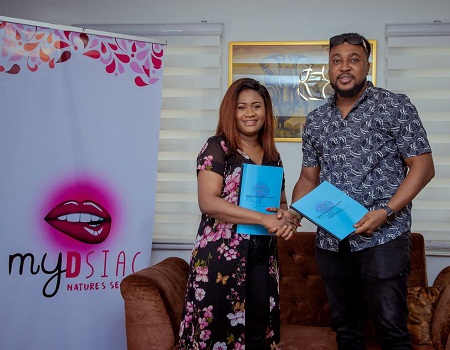 Nollywood actors, Nosa Rex Okunzuwa and Seyi Edun have advised the use of sex enhancers also known as aphrodisiacs to help solve issues between the sheets among couples.

They revealed this after being named as ambassadors for an aphrodisiac brand ‘Mydsiac’ recently. Also known as ‘My Aphrodisiac’, the owner, Tobi Kukoyi, who had observed the high alarming separation and divorce rates in marriages and relationships including in the entertainment industry, said this boosted the resolve to provide a solution to the negative recurring decimal.

Based on research she conducted, Tobi Kukoyi, in a chat with Tribune Online, realised that many had challenges that aphrodisiacs could easily remedy. According to her, “Mydsiac gives hope to couples in despair and helps to bring about that healthy and happy sexual relationship they desire. Both actors were chosen because they are happily married, have a reputable flourishing career, are youthful and ever vibrant.”

Nosa Rex made his debut in the Nigerian movie industry via the movie, ‘Gazzan Treasure’, starring alongside Patience Ozokwor, Yul Edochie, Mercy Johnson. Winner of the 2013 Best New Actor award at the City People Entertainment Awards, he went on to star in other movies such as ‘Lagos Real Fake Life’, ‘Perfect’, ‘Rags to Robe’, ‘The tears of a super-rich bachelor’, among others.

In a recent chat with Tribune Online, he said, “I’m elated to have been chosen to be the brand ambassador. Indeed many have issues with copulation which has wreaked havoc in marriages. Through Mydsiac, I can spread the word and help couples know that all hope is not lost. What they thought could not be remedied indeed has a solution.”

Seyi Edun, popularly known as Seyi Shai, plies her trade in the Yoruba arm of the industry and has carved a niche for herself in the competitive terrain with movies such as ‘Eja Nla’, ‘Ogo Olorun’, ‘Wonuola’ in her kitty. She also expressed her satisfaction in being associated with Mydsiac.

The movie industry which is a sub-sector of the entertainment terrain has witnessed the production of movies and TV series addressing various challenges in marriages and relationships such as finance, career, childbearing issues among others.

However sexual or copulation challenges remain in the shadows and have risen to become a primary challenge in many homes.

Mydsiac hopes to use the motion picture platform to address this pertinent issue thereby contributing its quota to enriching marriages with happiness and fulfilment.