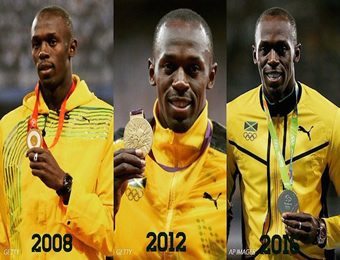 Usain St Leo Bolt ended his Olympic career with another gold in the 4×100 metre relay race, anchoring his Jamaican team mates to victory in 37.27 seconds, five metres ahead of Japan, that claimed silver.

My fans you guys never doubted me a min and for that I belong to you guys forever #blessed pic.twitter.com/j5xcwI0wXf

The victory gave Bolt a total haul of nine gold in three Olympic Games, a record he now shares with Finnish distance runner Paavo Nurmi and American sprinter and long jumper Carl Lewis. Bolt had earlier defended his 100 and 200 metres championships that he won in Beijing and London Olympics.

Just after the race in which he led the Jamaican team comprising, Asafa Powell, Bolt’s training partner Yohan Blake and Nickel Ashmeade, Bolt, who will be 30 years on Sunday, penned an appreciation to his fans worldwide.

This one is extra special #Rio2016 #200mGold pic.twitter.com/U3jbfKIM3E

The Jamaican who has 4.3 million followers on Twitter thanked the fans for believing in him: “My fans you guys never doubted me a min and for that I belong to you guys forever #blessed”, he said on his Twitter account C.

The relay race gave Bolt the Triple-Triple record that he set for himself on coming to Rio.

“There you go, I am the greatest. I’ve worked hard every Olympics to win three gold medals… so I’m just happy that I’ve accomplished so much,” Bolt told reporters.

“It’s a relief but I’m also sad that I have to leave. This is my last one… It’s just so many special feelings I’m feeling.”

Gbaramatu: Ijaws cry out over alleged bombardment of communities by soldiers