US Secretary of State to North Korea: ‘We are Not Your Enemy’ 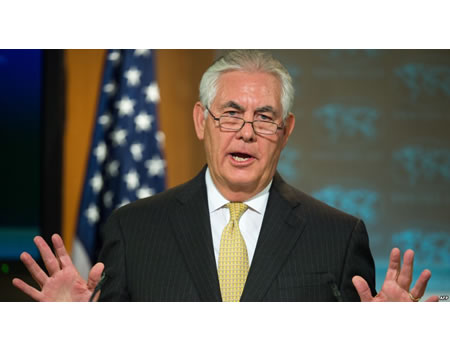 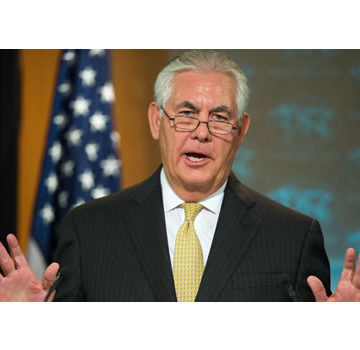 America’s top envoy is sending a message to North Korea that “we are not your enemy,” while the White House continues to assert that all options remain on the table to halt Pyongyang’s ballistic missile and nuclear weapons programs.

Despite what Tillerson termed North Korea’s “unacceptable threat” to the US, “we hope that at some point they will begin to understand that and we would like to sit and have a dialogue with them.”

But James Kim, a research fellow at the Seoul-based Asan Institute for Policy Studies, says Pyongyang’s continued ICBM testing underscores its rejection of the US approach..

“Until North Korea agrees to sit down under the terms laid out by the United States,” Kim told VOA’s Victor Beattie, “to first, freeze and then to eventually denuclearize, then I believe the talks will be a difficult proposition for the United States.”

Patience in growing thin, however, among some U.S. lawmakers.

Senator Lindsay Graham, a Republican member of the armed services committee, told reporters on Tuesday that “a war with North Korea would be devastating to the region, but it may be the only way to stop their missile program.”

Earlier in the day, Graham said during a US television appearance (NBC’s Today) President Donald Trump has told him, “There will be a war with North Korea over their missile program if they continue trying to hit America with an ICBM.”

Graham quoted Trump as saying, “if thousands die, they’re going to die over there.”

Asked about Graham’s comments, White House Press Secretary Sarah Sanders initially repeated a statement the administration has used frequently in the past, “All options are on the table.”

She was then specifically asked whether “destroying the country, like Lindsay Graham says, is an option,” and replied, “That’s not what I’m saying.”

Even talk about the possibility of a first military strike on North Korea is alarming some analysts.

“It would also result in millions of casualties and trillions of dollars in economic damage, perhaps triggering a worldwide depression,” said Joel Wit, senior fellow at the US-Korea Institute at the School of Advanced International Studies, part of Johns Hopkins University.

“Given those consequences, we have to seriously ask ourselves: Have we exhausted all possible options for dealing with the North including dialogue and diplomacy? The answer is no,” Wit tells VOA.

Frank Jannuzi, president and CEO of the Mansfield Foundation, agreed, saying “the idea that they can’t be deterred is fueled by the assumption the North Koreans are crazy, which they are not. They are rational actors.”

If eliminating Kim Jong Un’s regime is the goal that indeed might require full-scale war, according to Georgetown University Adjunct Assistant Professor Balbina Hwang. “And I doubt anyone in the Trump administration is remotely ready, at this time, to pursue any such a course of action,” Hwang told VOA.

“This is a classic example of false sense of urgency. It’s how we got into the Iraq war,” Jannuzi tells VOA. “For the last 11 years the North Koreans have had a nuclear weapon and could have put it on a freighter and sailed it into Long Beach [California] harbor.”