US, NGOs call for concerted action on marine wildlife conservation 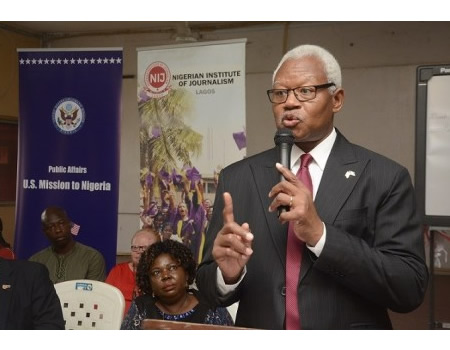 THE United States Consulate General in Lagos has urged Nigerians to treat the conservation of the oceans and aquatic wildlife as an individual responsibility, in order to preserve marine habitats for future generations.

The Public Affairs Officer of the US Consulate General Lagos, Mr Russell Brooks, made this known, delivering his remark at an event attended by leading environmental conservation activists, in Lagos.

The event commemorating the 2019 World Wildlife Day, was organised in collaboration with the International Climate Change Development Initiative (ICCDI) and Wildlife of Africa Conservation Initiative.

Brooks, speaking on the theme of Life below Water, observed that as much as 40 per cent of the world’s oceans is negatively affected by human activity, including overexploitation of marine species, loss of coastal habitats and pollution. He highlighted the crucial importance of the oceans and marine species to human development and emphasised the necessity for increased conservation education.

“Marine wildlife has sustained human civilisation and development for over a thousand years, from providing food and nourishment to providing material for handicrafts and construction. We cannot take their survival for granted. We can reduce some of the negative effects of our activity on life under the water, by working hard to spread the message to reduce marine pollution,” Brooks said.

Delivering welcoming remarks earlier, the Communications Director at ICCDI, Mr Abiodun Adekoya, noted that effective climate change mitigation in the country would require concerted action by governments and individuals, with an emphasis on conservation education, recycling programs and the creation of a legal framework for the nation’s policy on the environment.

World Wildlife Day is observed annually on March 3, following a proclamation by the United Nations General Assembly on 20 December 2013.