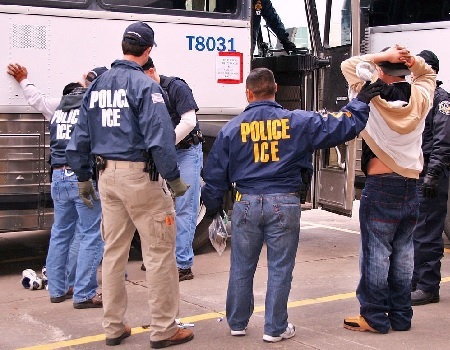 US immigration officials have arrested almost 700 people after a series of raids in the state of Mississippi.

The co-ordinated operations targeted workers at seven agricultural processing plants who allegedly did not have proper documentation.

Videos and photos showed agents arriving in buses to question and arrest the people BBC said.

Some children were taken to a local gym after they came home to find their parents gone.

US President Donald Trump announced an immigration crackdown in June, saying “millions of illegal aliens who [had] found their way into the US” would be removed.

About 600 ICE agents arrived at the chicken processing plants, owned by five different companies, in the towns of Bay Springs, Canton, Carthage, Morton, Pelahatchie and Sebastopol.

The agency’s acting director, Matthew Albence, told the Associated Press news agency it was one of the largest enforcement operations against undocumented immigrants.

Friends and family looked on as officers surrounded plants and began to arrest the workers.

A child daughter of one of the detained women can be heard weeping uncontrollably as people are loaded onto a bus.

“Her mum is in there,” a woman tells a police officer. “Her mum is her only legal guardian.”

The crying girl asks the officer, “Please, can I just see my mother, please.” The child was eventually allowed to see her mother before she was taken away.

When the officer returned the girl to the women helping her, he said her mother would be released the same afternoon.

“I’m going to tell you something, she’s not going to be deported because she has a US citizen child,” the officer said.

“Everything’s going to be fine, alright, don’t you worry about it, your mom’s not going to be deported, I promise you,” he told the girl.

As the buses drove off with the detainees, those gathered outside reportedly chanted, “Let them go!” and waved goodbye.

According to the Washington Post, the girl’s mother was not released as of Wednesday night.

Mr Albence said the children would be sent to live with relatives or with other families, according to AFP news agency.

Edo partners US doctors on Telemedicine, commences exercise on June 7