US govt to support free care of 60,000 people living with HIV/AIDS 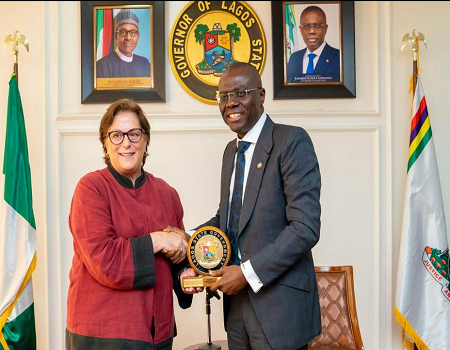 Consul-General of the United States (U.S.) Consulate in Lagos, Ms Claire Pierangelo, on Thursday said Lagos State is American government’s most effective partner in the control of HIV/AIDS epidemic in Nigeria, even as she disclosed that the healthcare project which is scheduled to hold will provide free ART care to approximately 60,000 people living with HIV across the country.

Pierangelo revealed this on Thursday when she led a delegation comprising U.S. officials and top partners on an advocacy visit to Governor Babajide Sanwo-Olu.

The envoy’s assertion followed the governor’s assurance to the American government on his administration’s ongoing executive-led actions to repositioning the activities of the Lagos State AIDS Control Agency (LSACA) for greater impacts and improved service delivery.

The meeting, held at the State House in Alausa, was aimed at securing the support of Lagos government in the implementation of additional $75 million budget for an Anti-Retroviral Treatment (ART) Surge programme funded by the American government under the U.S. President’s Emergency Plan for AIDS Relief (PEPFAR).

Administered by the U.S. Centres for Disease Control (CDC), U.S. Department of Defense and U.S. Agency for International Development (USAID), the healthcare project is to provide free ART care to approximately 60,000 people living with HIV, with the project also planned to be implemented across the nation.

Pierangelo thanked Sanwo-Olu for committing relevant agencies of the state to work with stakeholders in the implementation of the ART programme, expressing appreciation to the state government for cooperating with the American government in the move to achieve control of HIV epidemic in Nigeria.

“In Lagos State, we have found one of our best partners in Nigeria and Lagos government has worked with us hand-in-hand over the last five years we have invested a significant amount of money in Nigeria. Over $250 million, over the last five years, has been dedicated to finding, testing, diagnosing and treating Lagos State citizens and anyone else; this is to help them get treatment for HIV/AIDS and help live a productive, happy life and contribute to the economic growth.

“We have had a very productive meeting with Governor Sanwo-Olu. He is our great supporter not only in this programme but also on healthcare issues generally in Lagos. The U.S. remains committed to supporting Nigeria as it works to reduce and ultimately eliminate the scourge of HIV/AIDS among its people,” she said.

The US envoy further urged the state government to remove all barriers hindering people living with the disease from accessing free services offered by the U.S. government through PEPFAR project.

She said the disbursement of the additional PEPFAR funds was predicated upon the readiness of the Federal and states’ governments to eliminate financial barriers that prevented victims from accessing the programme, especially fee charged for non-essential services already provided by PEPFAR.

Speaking, Governor Sanwo-Olu said Lagos needed what he termed the “strategic collaboration” with the U.S. government and other development partners to stem the number of HIV victims.

He said the state had deployed the best approach in giving care to victims currently being managed by LSACA, but assured that his government would continuously review the effort for efficiency and measurable impacts.

“This collaboration is required and needed for us to properly address the scourge of HIV/AIDS. It is only when we raise the bar of efficiency on our part that our partners can say they want to do a lot more. We will not hesitate to position ourselves and reposition our agency to actualise the deliverables so that the people targeted in the programme can get relieved of the trauma.

“We are going to ensure that access to the programme is open and more robust in order to realise a win-win situation envisaged by the funders. It is only when we show those commitments in terms of resources, human capital and timelines that we get positive feedbacks and keep track of the objectives of the intervention,” the governor said.

He assured that Lagos would continue to leverage the partnership with the U.S. government, pledging the state’s commitment to its success, adding that his administration would do everything required to achieve the goals of the healthcare project in the state.

“My government will give all the support that is needed by the Lagos State agency to meet all expectations spelt out in the intervention,” Governor Sanwo-Olu said.

Another petrol tanker falls in Onitsha