US election 2020: Meet the Democrats vying to take on Trump 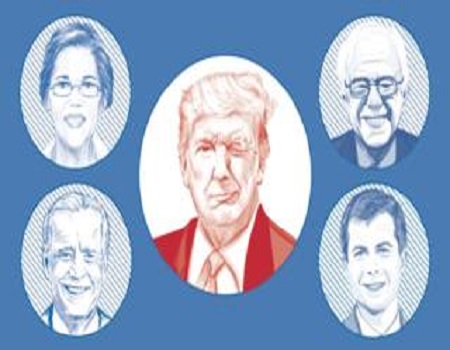 Election season is getting underway and the race to become the Democratic challenger to Donald Trump is hotting up.

Last summer, there were nearly 30 serious candidates vying for the attention of the party’s supporters, but fewer than ten are still standing.

Joe Biden and Bernie Sanders are the relatively well-known frontrunners, but some of the chasing pack were mostly unknown outside the Washington DC bubble before running.

Here’s our rundown of the candidates left in the race, with a take from the BBC’s Anthony Zurcher on each.

Who are they? What are their key issues? What’s their secret weapon against President Trump? We’ve got it all covered.

The race so far

Although the field has now been whittled down to less than ten contenders, at one point it had swelled to nearly 30 Democrats.

Former congressman John Delaney began his campaign back in the summer of 2017 and was joined a couple of months later by Andrew Yang. After two and a half years of campaigning, Delaney admitted defeat and withdrew in January. Yang dropped out after getting just 1% of votes in Iowa and 3% in New Hampshire.

Others, like Michael Bloomberg, left it late to get involved. Bloomberg’s strategy is to focus his attention on states that will vote on Super Tuesday (3 March), spending huge amounts of his personal wealth on TV ad campaigns to pick up support.

Joe Biden was the accepted frontrunner in this race throughout 2019. After serving as Barack Obama’s vice-president for eight years, he had strong name recognition and held a clear lead in national polls.

Since the start of this year, however, his numbers have dropped and Bernie Sanders overtook him in the RealClearPolitics national average after a strong showing in the Iowa caucuses. Support for Sanders is likely to continue growing following his win in the New Hampshire primary.

Pete Buttigieg was the big surprise in 2019, gaining traction while other high-profile candidates like Beto O’Rourke and Cory Booker struggled. His performances in Iowa and New Hampshire are likely to give him a further bounce.

There’s a lot of drama to come

There is one contest every week in February, but the race begins to get really busy next month. On 3 March, there are votes in more than a dozen states – including California and Texas, two states with a huge number of delegates on offer.

Although there is usually a clear winner much sooner, the race officially ends in July at the Democratic National Convention where the candidates with the highest number of delegates become the party’s presidential nominee.