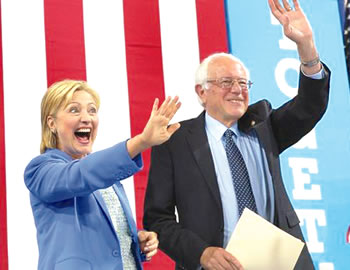 The Vermont senator and former Democratic presidential candidate is appearing with Mrs Clinton at a campaign event in New Hampshire.

Mrs Clinton and Mr Sanders have been negotiating since she all but guaranteed the nomination in June.

Mr Sanders hopes to have a large influence the Democratic platform.

“This campaign is about the needs of the American people and addressing the very serious crises that we face. And there is no doubt in my mind that, as we head into November, Hillary Clinton is far and away the best candidate to do that.”

“Thank you for your lifetime of fighting injustice,” said Mrs Clinton, and credited Mr Sanders for bringing new Americans into the political process. “I’m proud to be fighting behind you… it’s a time for all of us to stand together.”

His supporters have largely decided to support Mrs Clinton in an effort to stop presumptive Republican nominee Donald Trump from winning the White House.

Mr Sanders stayed in the Democratic race far longer than many expected, for weeks after it became clear he would not secure the delegates needed to win the nomination.

He has pressed Mrs Clinton to support his views on higher education, health care and the minimum wage.

“It is no secret that Hillary Clinton and I disagree on a number of issues. That’s what this campaign has been about. That’s what democracy is about,” said Mr Sanders.

“But I am happy to tell you that… there was a significant coming together between the two campaigns and we produced, by far, the most progressive platform in the history of the Democratic Party.”

Mr Trump, who has been trying to court Sanders supporters, wrote in a tweet that Mr Sanders has “totally sold out to Crooked Hillary Clinton. Fans are angry!”

How bullion van driver absconded with N60m in Rivers —Police