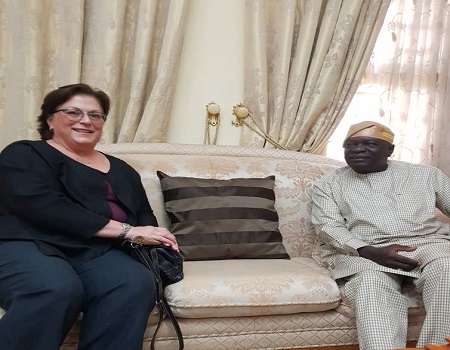 The Consul-General of the United States Consulate in Lagos, Ms. Claire Pierangelo on Monday paid a visit to former Osun State governor, Prince Olagunsoye Oyinlola in his Osogbo residence.

Ms. Pierangelo, who was accompanied by Jillian Itharat, Political Officer of the consulate, Arnold Abulime, Political Specialist and Joshua Egba of the US Trade and Development Agency said she was in Prince Oyinlola’s place as part of her office’s engagements with critical stakeholders in Nigeria.

They had about 90 minutes of discussions over a wide range of issues at the beginning of which Prince Oyinlola thanked the US officials for the visit.

With Prince Oyinlola to receive the visitors was a former Secretary to the State Government, Alhaji Kazeem Adio among others.

The US team later left for a similar meeting with Governor Gboyega Oyetola at the Osun State Governor’s office.

Murder of Fasoranti’s daughter: It is time to take the war to the enemy ―…