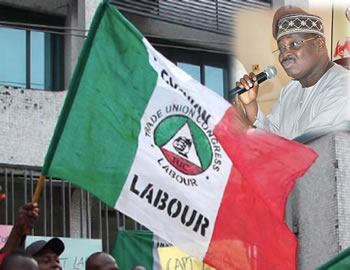 WORKERS in Oyo State marked this year’s May Day celebration, held on Monday, asking the Governor Abiola Ajimobi led government to clear the arrears of salaries, pensions, gratuities and see to the backlog of promotion.

Delivering his address, Chairman, Nigerian Labour Congress (NLC) Oyo State chapter, Mr Waheed Olojede, also called for the reinstatement and restoration of salaries of those workers cleared of allegations of certificate forgery in the 2016 verification exercise of the state government.

Among other calls by the labour union was the restoration of 50 per cent subvention to tertiary institutions and effective health insurance scheme for workers.

Governor Abiola Ajimobi of Oyo State, in his remarks, appreciated the maturity, resilience, perseverance of the state workers amid the delay in payment of salaries, gratuities and pensions.

Attributing the situation to dwindling federal allocation and meagre Internally Generated Revenue (IGR), he avowed that the state government was unrelenting in turning around the bad situation.

Represented by his deputy, Mr Moses Adeyemo, he described as erroneous the impression that the government was deliberately punishing workers through the ongoing restructuring exercise.

He emphasised that the verification exercise was to sanitise the civil service.

Urging workers to rededicate themselves to their duties, Ajimobi charged the workforce to advance innovative and creative ideas that will enhance better service delivery and good governance.