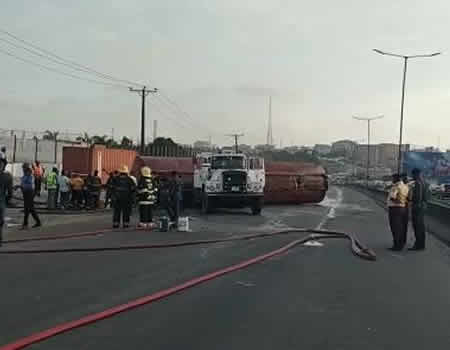 Private and commercial vehicle drivers have been left stranded in heavy gridlock as a diesel tanker fell on Otedola bridge in Lagos State.

They have been moving slowly hours upon hours as the emergency responders are carrying out operations on the dark spot in order to avert possible disaster.

Many roads in the state such as Maryland, Berger, Ogba, Allen, Ikorodu, and Bariga are all confronted with this road gridlock.

It will be recalled that a truck laden with automated gas oil fell on the Otedola bridge five hours ago.

Tribune Onine gathered that no casualty was recorded, as all emergency responders were being activated.

It added that vehicles were being diverted away from the scene of the accident whose immediate cause has been attributed to the failure of the truck’s brakes.

Meanwhile, the commercial branded motorcycles are providing succour to enraged passengers who are in a hurry to get in touch with their children and loved ones at home.

Why Bola Tinubu can never be Nigeria’s President