•We didn't know he was coming Ajimobi's aide •Ajimobi's wife to observe 130 days of mourning till November 2 •Our father was an epitome of a great leader, human empathy ― Son 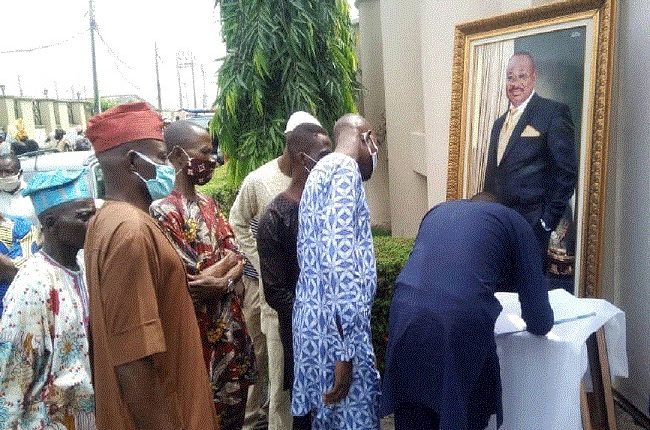 Persons including the deputy governor of Oyo State, Mr Rauf Olaniyan were unable to gain access into the venue of the eighth-day fidau prayer for the former governor of the state, Senator Abiola Ajimobi, held on Sunday.

Olaniyan, in a convoy of some other government officials, had arrived at about 11.20 am only to be told that the gate had been shut because only a limited number of persons were desired so as to ensure adherence to COVID-19 protocols.

While the drama outside lasted, the prayer continued with the wife of the deceased, Mrs Florence Ajimobi and children alongside Senator Teslim Folarin, former governor Adebayo Alao Akala among dignitaries present.

However, media aide to the late governor, Mr Bolaji Tunji, in his reaction, said the deputy governor arrived after the prayer had started, while the event was strictly meant to be a family affair.

Tunji said the gate was shut because of the need to ensure social distancing with not more than 30 persons expected to be seated.

He added that the protocol or advance team of the deputy governor did not notify the Ajimobi family of Olaniyan coming to attend the event.

However, on arrival of the deputy governor, Tunji said the family was making attempts to make space for Olaniyan to sit in a private sitting room but he left before they returned.

Tunji explained that there was no intention to spite the deputy governor.

“No one was aware that the Deputy Governor was coming as neither the advance team nor the protocol informed us.

“By the time we got to the gate to usher him into the sitting room, he had left. Everything happened within a spate of 10mins.

“Through a serving Senator and a former Attorney General, we tried to get in touch with him that it was not to slight him and he could sit in a private sitting room provided by the family. Unfortunately, he had left. We, however, apologise to his Excellency,” Tunji said.

In a counter-reaction, the Peoples Democratic Party (PDP) in Oyo State chided the position of the Tunji, positing that the Ajimobi family was well informed in advance that the deputy governor will be leading a delegation to the event.

The party in a statement by its publicity secretary, Mr Akeem Olatunji, added it was difficult to accept that the event was a private family affair with former governor Alao Akala present at the venue.

The party decried that the Ajimobi family continued to rebuff the hands of fellowship extended by the Governor Seyi Makinde government.

“To the unsuspecting members of the public, kindly disregard APC Media Team Press Release in its entirety; it wasn’t a private family affair because Otunba Alao Adebayo Akala and many others were there and the family were well informed in advance that the Deputy Governor would be leading the Government delegation to the event.

“The more the Governor try to extend hands of friendship the more they rebuff his good gesture,” the Oyo PDP statement read.

Meanwhile, in a sermon at the fidau, Chief Imam, Oluyole Extension Central Mosque, Alhaji Atanda Bada, spoke of the impossibility of humans to be perfect and the inevitability of death.

Noting that Ajimobi lived out a life of dignity and several core values which were being applauded even in death, Bada said it was fitting to remember and pray for the dead.

Doing the sermon in Yoruba, renowned Islamic preacher, Alhaji Ajani Bello urged wife of the deceased, Florence Ajimobi to continue to pray to God to forgive the misgivings of her husband.

Bello also tasked Florence Ajimobi to ensure pay good attention to the disciplined conduct of her children and ensure they don’t go astray.

Bello said Florence Ajimobi would observe 130 days of mourning dating from June 25, that her husband died, to end on November 2.

Chairman, Muslim Community of Oyo State, Alhaji Kunle Sanni praised the late Ajimobi for ensuring there was no religious crisis in the state for eight years of being governor.

Son of the late governor, Idris Ajimobi described the late Ajimobi as irreplaceable, an epitome of a great leader and one who set a standard that the family will continue to aspire to achieve.

“Our father was the epitome of a great leader and human empathy, always kind and loving, playful yet serious, father yet a good friend, husband yet best friend.

“Our father is irreplaceable and will greatly be missed. We’ve experienced a great loss. You came, you saw, you conquered. You’ve set a standard that we’ll forever aspire to achieve.

“We shall continue to make you proud. Your memory will continue to live on in us and Insha Allah, will never die,” Idris Ajimobi said.