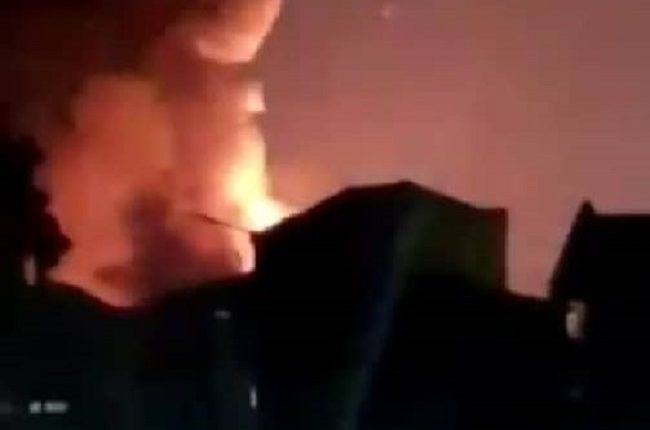 A fire Outbreak has occurred due to the collusion of 40-fit containerized Truck and fuel-laden tanker on Otedola bridge inward berger area of Lagos state.

Tribune Online gathered that no casualty was recorded as the unfortunate incident happened at 2am on Saturday morning.

In a statement issued by the Head, Public Affairs-LASEMA, Nosa Okunbor stated that

He explained that the collision was as a result of a brake failure on the part of the containerized truck while moving inward Berger.

“On arrival at the incident scene,  it was discovered that a 40fit containerized Truck loaded with fabric had a brake failure while moving inward Berger.

“It then collided with a tanker loaded with 33000 liters of PMS. The impact of the collision resulted in fire outbreak.

“No casualty was recorded.However, the fire affected the 40ft containerized truck and high tension wire. A stationary truck with registration number KBG 91 XA containing PMS which wasn’t involved in the collision was equally affected by the fire” It stated.

It would be recalled that In 2018, an explosion involving a fuel tanker on the bridge left many dead and lots of destruction in its wake.

Another tanker loaded with 33,000 litres of petrol got burnt on the Otedola Bridge in 2019 but no casualty or injury was recorded.

In May 2020, two tankers laden with Kerosene and Diesel respectively, had a head-on collision at the bridge but an explosion was averted.